O’Reilly filly in line for Group One homecoming 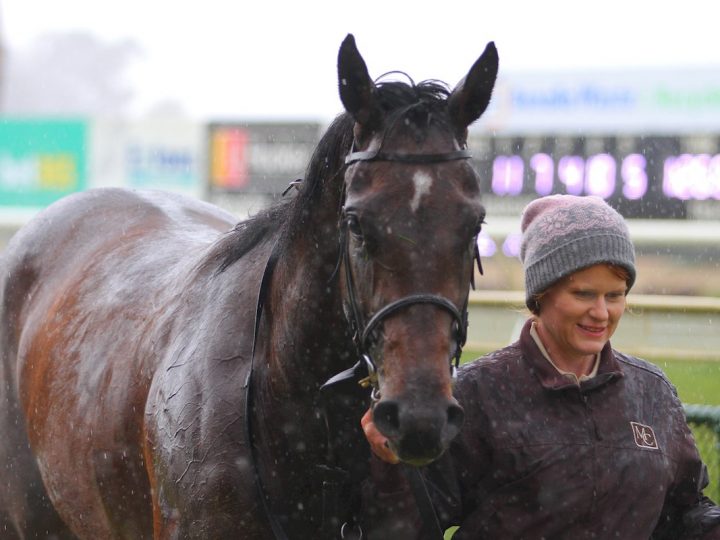 Tigeen (NZ) in the mounting yard after winning the Bertolis Farm Machinery F&M Maiden Plate on September 04, 2017 in Benalla, Australia. (David Thorpe/Racing Photos)
Ballarat trainer Matt Cumani is giving serious thought to sending his Kiwi-bred filly Tigeen home for a Group One opportunity.
He has the daughter of O’Reilly entered in the Gr.1 gavelhouse.com New Zealand 1000 Guineas (1600m) and plans for a trip to Christchurch in November could firm up later this week.
Tigeen continued a good run for Cumani with his 2016 Karaka purchases when she was successful on debut at Benalla over 1400m earlier this month.
“I’m still working out what distance is best for her and if she can learn to settle,” he said.
“She ran a little keenly first-up so she’s stepping up to a mile at Bendigo on Thursday and that will give us a line on her.
“She’s in the 1000 Guineas here, but that might come up a bit quickly for her so the Guineas in New Zealand is a potential Group One target.
“She’s owned by my parents so breeding is definitely the aim for her later on.”
Cumani’s mother Sara operates Fittocks Stud in England while his father Luca, an internationally-successful trainer, has his stables at nearby Newmarket.
A $220,000 purchase out of Little Avondale Stud’s draft, Tigeen was signed for by Matt Cumani and bloodstock agent Phill Cataldo.
She is out of the English-bred Green Desert mare Knocknacrea, who is from the family of the Luca Cumani-trained Gr.1 Ascot Queen Elizabeth II Stakes (1600m) winner Markofdistinction.
Back to all news
SHARE
Recent News