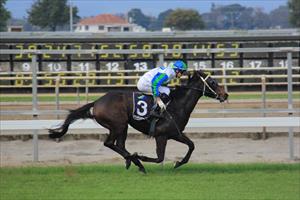 Novelty opened her account with a minimum of effort at Matamata this afternoon. The WS-bred and owned daughter of O’Reilly capped off three previous placings with an effortless victory over 1400 metres.
Settled in the trail by Leith Innes, the filly was coasting on the turn and she bolted clear in the straight. “We put the blinkers on today to get her up handy,” said Eddie Chippendale, who prepares the three-year-old with Stephen McKee. “It was a beautiful ride by Leith.”
She is the second foal of the Savabeel mare Promenade, who is a half-sister to the Group One winners Legs and Guyno. Cambridge trainer Roger James purchased the full-brother to Novelty at Karaka last year for $160,000.