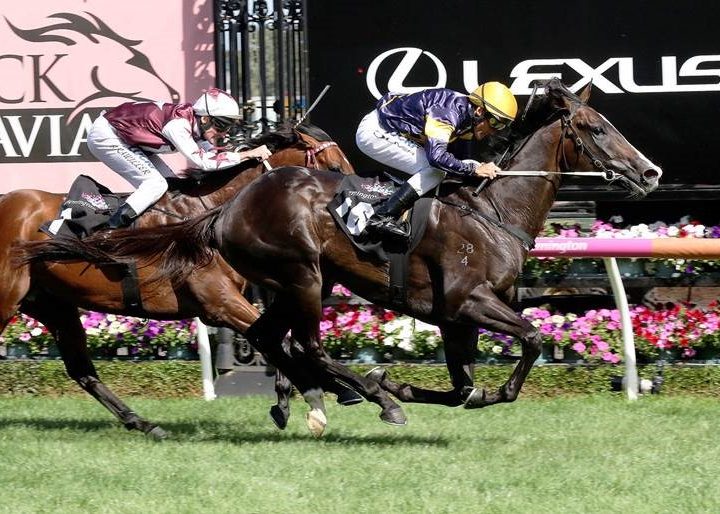 The former put away a top-class line-up in the Gr.1 Makybe Diva Stakes while Brutal remained unbeaten after the Listed Antler Luggage Plate.

The Mick Price-trained Grunt now promises to be the star of the Melbourne spring carnival with an array of options open to him.

“He’s in everything. He can go three weeks into the Turnbull and then the Caulfield Cup or the Underwood, Caulfield Stakes and go to the Cox Plate,” Price said.

“I am a bit concerned how well he would get around Moonee Valley though.”

“He’s a beautiful staying horse and he’s got 54kg in the Melbourne Cup,” he said. “It didn’t hurt Rekindled so there’s that option as well.”

Grunt travelled in fifth spot to the turn and when rider Damien Oliver asked him to lengthen stride in into the straight he did so in fine style.

“Today was D-Day and he does enjoy the big, open spaces here,” Oliver said.

“It was a truly run race and when I popped out he chimed in perfectly and you saw the real Grunt.” Plans for Brutal are also yet to be confirmed after winning his third successive start.

Options include backing up next Saturday in the Golden Rose at Rosehill, pressing on toward the Caulfield Guineas or freshening for the Coolmore Stud Stakes.

Hawkes even indicated the stable could send the colt for a spell.

“Those races are there and they’re very tempting, but we’re going to let him tell us what he wants to do,” Hawkes said.

“It’s his first prep and he’s going to be a hell of a horse in the autumn.”

Hawkes said Brutal had to do it the tough way on Saturday by leading and racing into a fierce headwind.

“You don’t make excuses when they win and that is what he is, a winner,” Hawkes said.

“He’s not the fully furnished racehorse but he’s had three starts for three wins.

“He’s won a stakes race over 1400 metres at Flemington, so for where he is at this stage of his career, it doesn’t get any better.”