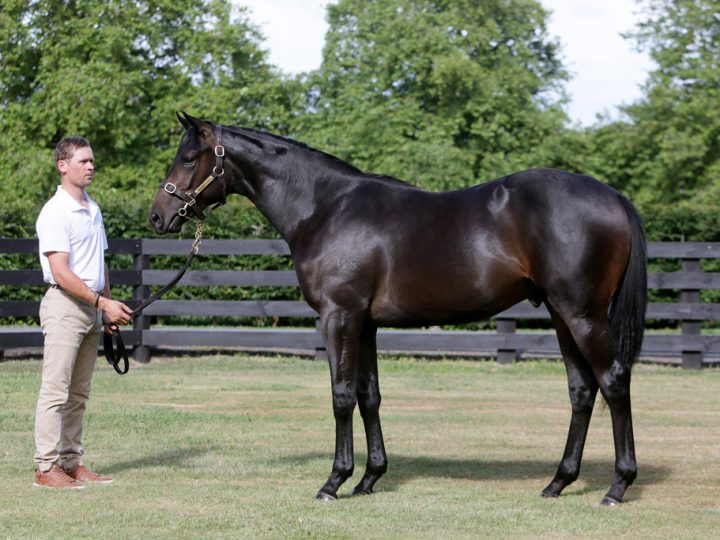 Bruce Perry went to the top end of his budget to secure Waikato Stud’s stunning Almanzor colt during the closing session of Book 1 at New Zealand Bloodstock’s National Yearling Sale.

The Masterton-based bloodstock agent beat off trainer Stephen Marsh and the powerful Te Akau operation to land Lot 416 for $420,000
Perry manages the breeding and racing interests of Wellington businessman Lib Petagna and bought the Almanzor colt for the JML Bloodstock Principal.

“I saw him a while ago in the paddock at Waikato Stud and he’ll be staying in New Zealand, but we haven’t got a trainer yet,” Perry said.
“He’s a beautiful horse with a lovely temperament and thought he would sell around the $400,000 mark.”

The colt is out of the Savabeel mare Genius, a four-time winner, and her only foal to race is the Hong Kong winner Breeze Of Spring.
“There is a lot of Savabeel about this colt and the best of Almanzor’s traits. I’m thrilled to have got him,” Perry said.

It is also the family of the G1 CF Orr S. winner Manuel (Commands) and the South African Group winners Hancock Park and her daughter Park Lane.
Another notable sale was Lot 474, with Cambridge trainer Tony Pike landing the last blow at $420,000 to secure the Waikato Stud-offered daughter of Almanzor.

Pike has enjoyed multiple Group 1 success with the filly’s half-sister The Bostonian and is hoping the physical similarities between the pair will also stretch to shared racetrack ability.

“Dick has been looking for high-class fillies and we had a few on the list and missed out on a couple on Monday,” he said.

“She is very similar to her half-brother on type and is a lovely-walking filly with a great temperament. I thought she may have made a bit more so it’s a fantastic result and I’m very grateful to Dick.”

The filly is out of Keepa Cheval and she is a half-sister to the 10-time Group 1 winner and two-time New Zealand Horse of the Year Mufhasa.
Waikato Stud was away to a strong start this afternoon with a Savabeel colt, Lot 405, realising $360,000.

He attracted an opening bid of $150,000 and was on the market from that point with Te Akau’s David Ellis winning battle in the ring with a successful closing bid.

The colt is the first foal of the Pins mare Flamingo, who won the Listed Wairarapa Thoroughbred Breeders’ S. and is a half-sister to the Singapore black-type winner Preditor.

Soon after, Guy Mulcaster was busy online and had the last laugh at $310,000 for a son of Savabeel out of the multiple winner Frankly, also a daughter of Pins.

The colt is a half-brother to the unbeaten Listed Mitchell McKenzie S. winner Ocean’s Beyond and the family of the great O’Reilly and the two-time Group 1 winner Madison County.