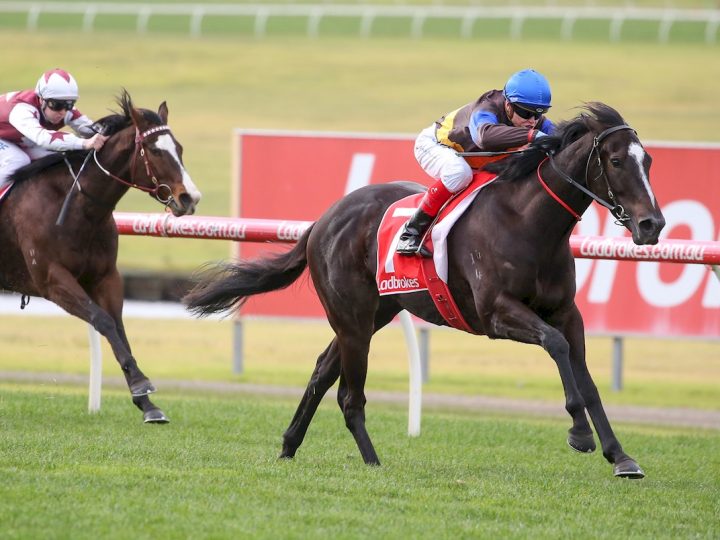 Champion New Zealand sire Savabeel gave us the ‘One to Watch’ on Wednesday with a sensational win for the three-quarter brother in-blood to triple Group I winner Sangster.

The pair co-own and bred exciting three-year-old Gold Mag who took his unbeaten tally to two at Sandown on Wednesday.

The Savabeel gelding showed a tremendous turn of foot to sail past his opposition to score by five-lengths under jockey Craig Williams.

“He showed a great turn of foot and changed stride in the straight and was three-wide all the way,” Grieve said. “I’m very happy with the win.”

Gold Mag only had the one unplaced trial in New Zealand for trainer Finbarr Leahy before Grieve fielded a call from David Hayes.

“His trial in New Zealand was quite a good trial,” Grieves said. “David Hayes rang me out of the blue and told me he had heard I had quite a nice horse and that he’d like to train him for me.

“I thought with that sort of initiative I’ll give him a go.”

It is a decision that Grieve has not regretted, with Gold Mag winning by a similar margin on debut at Bendigo in June, followed by Wednesday’s impressive victory.

“They (trainers) are pretty excited. He’s still got youth on his side, so we’ll take him along slowly,” he said.

“We’ll just ease up on him now and bring him out in a couple of months time. He’ll be a handy horse in 13 to 14 months.”

Grieve, a 75-year-old former trainer, is excited to once again have a quality horse on his hands, but Gold Mag still has a way to go to top his list.

“It’s good to have a nice horse on my hands again after 50 years in racing,” he said.

“I’ve been keen on racing all my life. I had my first winner in 1969 and had a horse or two before that. I trained my first winner at Wellington in 1970, so I have been playing around with horses for a long time.

Meanwhile, Grieve said he is just as rapt for his breeding and owning partner Barry Thomas, who was made a Companion of the New Zealand Order of Merit for services to tourism and business in the 2018 Queen’s Birthday Honours.

“I met him through a review committee we were in, it was of New Zealand Thoroughbred Racing as a matter of fact. We got matey and began racing a few together.”

That has resulted in the pair breeding Gold Mag and Grieve hopes his future success can pay for his dam Chapinta to return to his sire this season.

“We’d probably be wise to go back to Savabeel (this coming season), we might be able to afford it by then.”– NZ Racing Desk