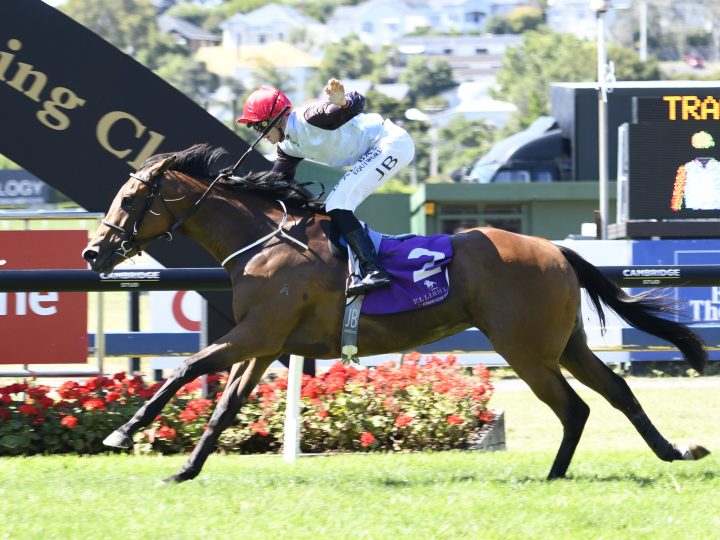 A rails-hugging ride by Jake Bayliss paved the way for classy filly Pinmedown to add a second black-type victory at Ellerslie to her record when she scored in the Gr.3 McKee Family Sunline Vase (2100m).

The Mike Moroney and Pam Gerard-trained three-year-old had taken out the Gr.2 Eight Carat Classic (1600m) on a Heavy10 surface on Boxing Day, but relished the Good3 track on offer on Saturday afternoon.

Sent out as a $5.50 favourite in an evenly balanced contest, Pinmedown enjoyed a perfect run in mid-field throughout in a muddling run race.  Asked to move into contention nearing the 600m mark Pinmedown soon found herself with a wall of horses in front of her as the challenges came out wider.

Bayliss spied a gap one-off the fence at the 300m mark and when the Pins filly saw clear air, she burst through the gap to dash to the front and defeat Clementina and Savy Yong Blonk, who both closed nicely out wider.

“It was going to be fifty-fifty where we ended up from the gate, but we found ourselves a little handier in mid-field,” Bayliss said.

“From there it was just a matter of getting out and giving her a bit of room.

“I thought she was a momentum filly, but she gave a good turn of foot up the straight.

“She ran right through the line, so she is definitely on an Oaks path.”

Co-trainer Pam Gerard confirmed that the Gr.1 Al Basti Equiworld Dubai New Zealand Oaks (2400m) at Trentham in a fortnight was a target for her charge although she did admit she would have to keep her fingers crossed that the accident-prone filly could get there in one piece.

“I think that she’s just a very very good horse,” she said.

“I’ve thought that all along although she’s a little accident-prone and doesn’t help herself.

“She gets really wound up raceday and when you look at her in the birdcage she’s sweating up and you wouldn’t have a bar of her.

“She would be one of the toughest horses I’ve ever come across, she just throws curveballs at you all the time.”

Gerard is keen to see Pinmedown tackle the 2400m of the Oaks journey as she believes she will relish the challenge of the feature event where she is listed as a $6 third-favourite by TAB Bookmakers.

“She is tough and gives her all, all of the time,” she said.

“On her breeding I don’t think that (the 2400m distance) is a problem as that is why Mike and Paul bought her.

“It’s what we have aimed at all along and to get two (stakes wins) along the way is a bonus.”

Pinmedown is the daughter of Oregon mare Alleyway and hails from an extended family that includes two-time Hong Kong Horse of the Year, Ambitious Dragon. She was purchased by Paul Moroney for $28,000 from the Ardsley Stud draft at the 2017 National Yearling sale. – NZ Racing Desk