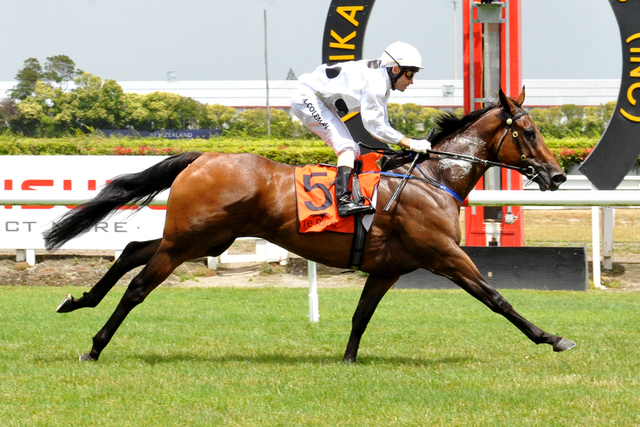 A pair of gifted daughters of the WS stalwart Pins quinellaed the Gr.3 Gold Trail Stakes at Hastings this afternoon. Honey Rider was a first-up winner of the feature ahead of the fast-finishing Glass Slipper.
Honey Rider gave co-trainer Andrew Forsman a pre-race scare before she won for the second time in her brief career. “I was very confident going into the race, but my confidence dropped a bit when she broke into a sweat and I thought she may have been a bit fresh,” he said. “She got the job done though and she’s a pretty high-class galloper.”
Forsman said the filly’s programme through to the Gr.1 gavelhouse.com NZ 1000 Guineas had yet to be locked in. “We’ll see how she comes through this first and then it’s about getting her down to Riccarton in the best possible order.”
Honey Rider settled in the trail before in-form jockey Michel Coleman was able to ease off the fence into the straight. “I was a little bit anxious about getting out and once we did she showed good fight,” he said.
Honey Rider was a debut winner at Hastings last season and finished runner-up at her only other appearance in the Listed Castletown Stakes. She had trialled at Te Teko and Cambridge ahead of resuming. “In her first trial she wasn’t very flash, but she had improved out of sight when I rode her in the second one,” Coleman said.
Back to all news
SHARE
Recent News