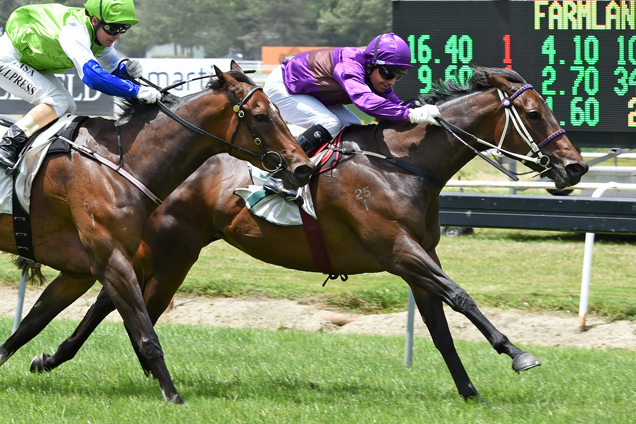 Lisa Latta rarely goes home empty-handed from Riccarton and a Pins mare ensured it was business as usual at this New Zealand Cup carnival. The Awapuni trainer produced Reilly Lincoln to put away her rivals in this afternoon’s Gr.3 Lindauer Stewards’ Stakes Handicap.
The five-year-old was a month between runs when she had finished fifth in Saturday’s Listed Pegasus Stakes and a race she derived benefit from. “They went hard the other day and she just compounded,” Latta said. “We’ve just swum her since then and she hasn’t had a saddle on her.”
Ridden by Rosie Myers, Reilly Lincoln jumped well to sit outside the leader and, after taking control on straightening, she held a strong gallop for the seventh win of her career and her first at stakes level. “She had a beautiful trip today and she stripped a lot better than she did on the first day,” Latta said. “We wanted to get some black type with her and she’ll have a week in the paddock now before we look for some nice sprints for her.”
Reilly Lincoln is raced by her breeders John and Lynne Street under their Lincoln Farms banner. “They’ve been so loyal to me for a long time and they’re great friends,” Latta said.
Pins completed a winning double at Riccarton when the WS-bred and raced Residential claimed major honours in the NZB Ready to Run Sale Premier 3YO. A daughter of the stakes winner Metropolitan, she has now won two of her last three starts.
“She hit the rail a couple of times so I was a bit apprehensive,” said Karen Parsons, who trains the filly with her husband John. “She’ll get a mile without any doubt and she might even get a mile and a quarter.”
Reilly Lincoln is the fourth stakes winner this season.
Pins’ four stakes winners this season comprise:
MACKINTOSH (12g, Generous) ATC Theo Marks Stakes (1300m) G2
LEGLESS VEUVE (13f, O’Reilly) MRC Caulfield Guineas Prelude (1400m) G2
HONEY RIDER (13f, Align) Hawke’s Bay Gold Trail Stakes (1200m) G3
REILLY LINCOLN (11f, O’Reilly) Stewards Hcp (1200m) G3
Back to all news
SHARE
Recent News