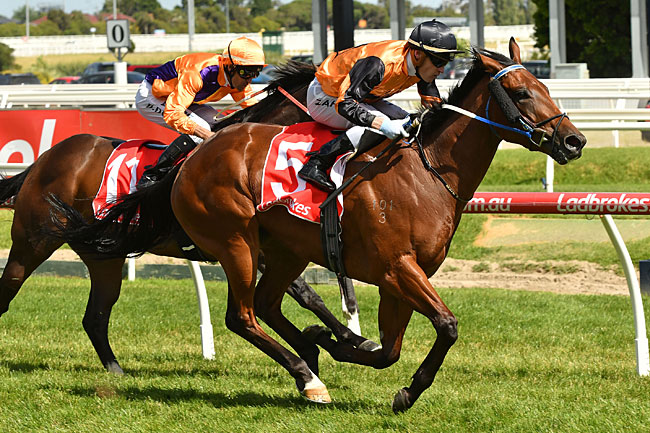 WS product Legless Veuve has rocketed into Group One contention in Melbourne after an outstanding performance yesterday. The daughter of Pins handled a sharp rise in class admirably when she accounted for a hot field of fillies in the Gr.2 Caulfield 1000 Guineas Prelude.
A recent maiden winner at Sale, she downed last season’s Gr 1 Manawatu Sires’ Produce Stakes winner Luna Rossa for trainer Stuart Webb and rider Mark Zahra.
“She’s still got her winter coat and she’s still a fair way behind (in her development) but she’s got tons of ability so we’ll give the Thousand Guineas a go in two weeks and then probably put her away as she’s still a baby,” Webb said.
He subsequently explained the three-year-old’s unusual moniker. “We had a naming day at Randwick and it’s fair to say a few of the owners were a bit legless on the Veuve (Clicquot) and so that was it,” Webb said.
On the advice of Performance Genetics’ Byron Rogers, Legless Veuve was purchased by Aquanita Racing out of WS’s 2015 Premier Sale draft to Karaka for $150,000. A daughter of the O’Reilly mare Hyades, she is a sister to the Gr.3 Mannerism Stakes winner and the Gr.1 Telegraph Handicap runner-up Tootsie. It is also the family of the Gr.3 Taranaki Breeders’ Stakes winner No Excuse Maggie.
Back to all news
SHARE
Recent News