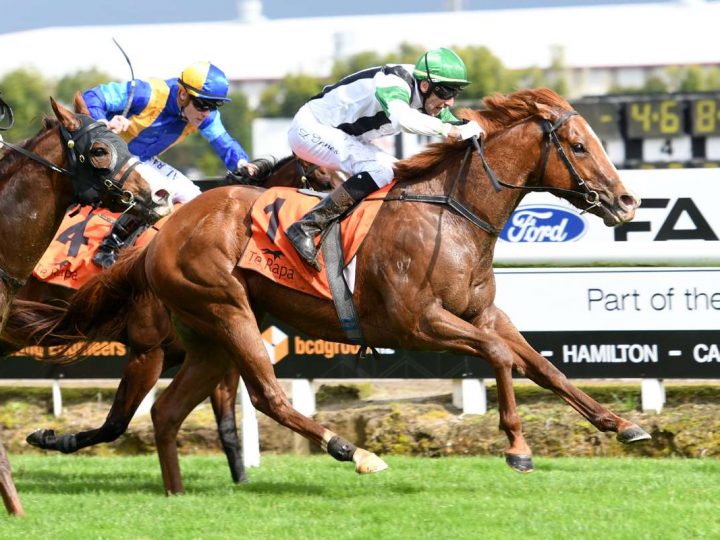 Felton Road
Talented three-year-old Felton Road has opened his classic season in perfect style with trainer Tony Pike now plotting a path for the WS-bred and sold colt toward a Group One feature. The lightly-tried youngster resumed in Saturday’s Doug Hawkings 50th Birthday 1100 at Te Rapa where he overcame a testing track to post the third win of his fledgling career.
The son of Pins sat at the back of the small field and when a gap one off the fenced presented itself in the closing 100 metres he was through in a flash to beat Ohceedee. “I thought it was going to get a bit ugly, there wasn’t much room there for a while,” Pike said. “It was good to see him come back so well. He relaxed nicely and it was good to see him sprint so well on such a wet track.”
Felton Road, whose major spring target is the Gr.1 Al Basti Equiworld New Zealand 2000 Guineas, will make his next appearance in the Listed Tavistock Northland Breeders’ Stakes on September 16. “We’ll look at Ruakaka in a months’ time and then take the Guineas races as they come along and as long as his form continues we’ll be looking at Riccarton,” Pike said.
A two-time winner last season and third in the Karaka Million, Felton Road has been ridden in all of his starts by Leith Innes. “The horse is going great, but he didn’t really enjoy the track,” he said. “I was surprised how well he sprinted, it’s pretty heavy out there.”
Felton Road was bought out of WS’s 2016 Select Sale draft to Karaka for $20,000. He is out of the O’Reilly mare Rose Red, who is from the family of the Gr.3 Mannerism Stakes winner and Gr.1 Telegraph Handicap placegetter Tootsie.
Back to all news
SHARE
Recent News