Pins the star of the show 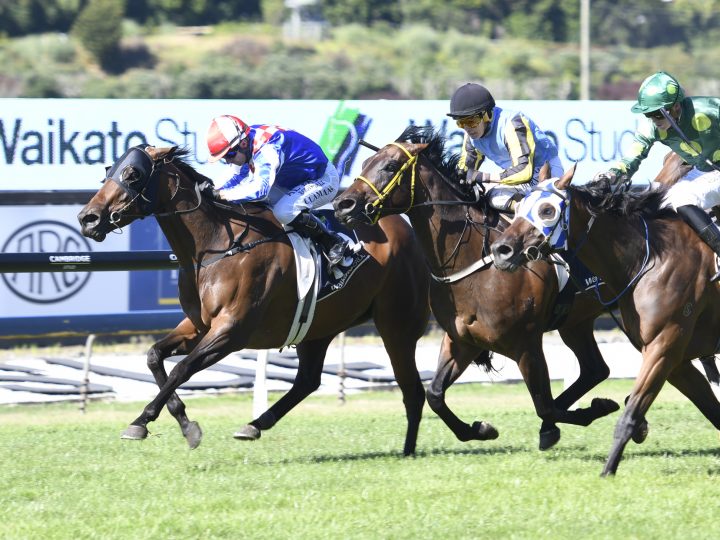 A stellar day for Waikato Stud’s late, great stallion Pins at Ellerslie was headlined by a pair of Group Three victories.

His daughters Princess Kereru and Pinmedown did the sire proud this afternoon while at Wingatui he was also to the fore.

Princess Kereru was an appropriate winner of the Gr.3 Waikato Stud Plate for trainers Ken and Bev Kelso and Mark Donoghue.

The Gr.1 Railway Stakes runner-up turned in a stylish performance for the fifth success of her career.

“She’s just a little trooper,” Ken Kelso said. “Her form’s been great all year and she really deserved that as she hasn’t had a lot of luck in the big races.

“It is so important to get that winning black-type to go with that Group One placing.

“She is just the most adorable little horse you’ve ever come across.”

“I’ve thought that all along although she’s a little accident-prone and doesn’t help herself.

“She gets really wound up race day and when you look at her in the birdcage she’s sweating up and you wouldn’t have a bar of her.

“She would be one of the toughest horses I’ve ever come across, she just throws curveballs at you all the time.”

Gerard confirmed Pinmedown, who was bought by Moroney’s brother Paul for $28,000 at Karaka, would run in the Oaks.

“She is tough and gives her all, all of the time,” she said.

“On her breeding, I don’t think that 2400 metres is a problem, that’s why Mike and Paul bought her.

“It’s what we have aimed at all along and to get two (stakes wins) along the way is a bonus.”

At Wingatui, Emily Margaret crossed the field from a wide gate and was never headed in the Listed NZB Insurance Stakes.

“We thought we could just grind them all into the ground and that is what she did,” co-trainer Kevin Hughes said.

“She was very, very fit and was just too good on the day.

“She seems to have come through the race very well and we will have a look at the Wellington Guineas. The travel doesn’t seem to worry her.”