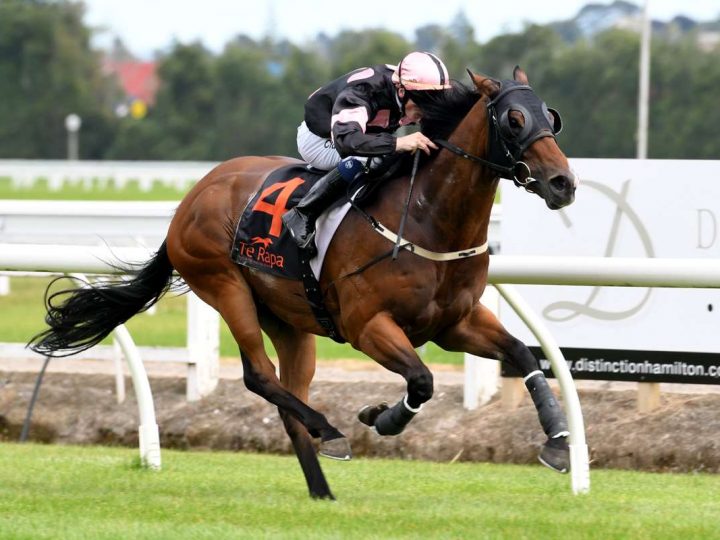 PINZALOT
Exciting sprint prospect Pinzalot showed he could be a force to be reckoned with at a higher level next season when he demolished a handy field over 1400 metres at Te Rapa on Saturday.
The four-year-old Pins gelding made it back to back victories at the venue when he charged clear in the run home to score in a slick 1.21.65 in the Cal Isuzu sponsored rating 75 contest. The victory was a sweet result for trainer Mark Forbes who turned down a start in Listed company at Trentham in preference for the Te Rapa event.
“I had him set to go to Trentham for the Listed sprint there but pulled the pin in the end,” he said.
“I had a chat with Tony Pike about it, particularly about how he might be weighted in the future if he won it and we both felt he would be treated pretty harshly. He has a real future in front of him so I decided to just keep him to his grade for this run.”
That decision paid off in spades as apprentice Jordan Nason produced a heady ride that saw him dominate from in front despite being a stride slow from the barriers.
“I said to Jordan he would probably miss the start as that’s just a quirk he has,” explained Forbes.
“The plan was to get him to the front if he could and then stack them up to around the 600-metre mark. Once he got there I told him to get rolling and try and take the backmarkers out of play.
“To his credit, Jordan rode him beautifully and did exactly what I asked.”
Forbes will now look to give his charge his opportunity at a feature event with an eye to bigger plans next season.
“As long as he comes through Saturday well we might take him to Awapuni on the 1st of April for a Listed 1400 metre race,” he said.
“That will most likely be his last run for this campaign as he’s been up a long time and I think he will only get better with a decent spell under his belt. He’s still a day to day proposition due to the tendon injury he suffered in Hong Kong although he has been as good as gold so far.
“If he shows he is up to it then those early races during the Hawkes Bay Spring Carnival look made for him.” – NZ Racing Desk
Back to all news
SHARE
Recent News