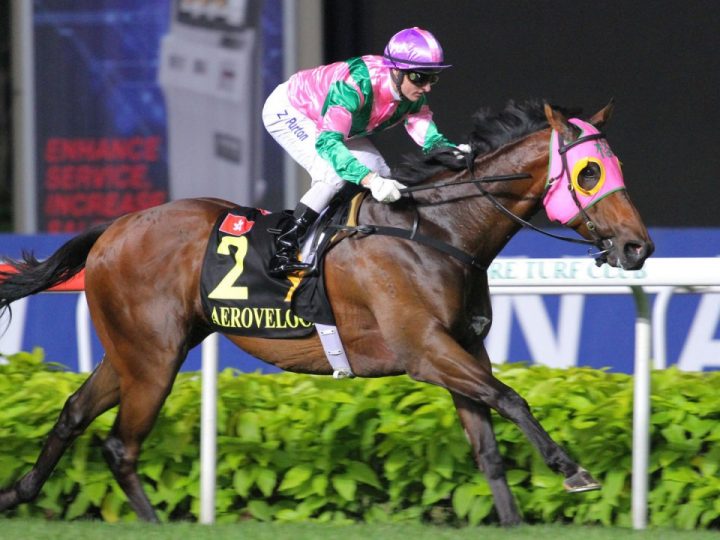 Aerovelocity missed out on last month’s G1 Takamatsunomiya Kinen – a race the gelding won in 2015 – after suffering an untimely bout of colic whilst in Japan. But this week, Hong Kong’s Champion Sprinter took an important step in his bid for some redress in the G1 Chairman’s Sprint Prize (1200m) at Sha Tin on Sunday week (1 May).
Paul O’Sullivan’s charge stretched out under regular race pilot Zac Purton in a 1200m all-weather barrier trial, finishing ahead of nine others in a time of 1m 09.77s. The gelding lengthened as required into a headwind that buffeted up the home stretch.
“I thought his trial was nice enough,” said Purton. “Obviously, it’s been a difficult time with having the colic in Japan, having to spend all that time in quarantine – it’s probably just got away from us a little bit.
“He had a really good blow when he pulled up, he needed it and he’s going to come along a lot from it. He is the type of horse that can improve quickly – I’ve ridden him from one trial to the next before and he’s been just okay and then I’ve ridden him in the next trial and he’s gone brilliantly, so we’ve got 10 days until he races and I think he should be in good shape by the time he gets there.”
Aerovelocity’s recent colic was a second setback this term. The Pins gelding missed December’s G1 LONGINES Hong Kong Sprint when O’Sullivan deemed his charge to be below-par. The gelding, notorious for his bull-headed antics, returned in feisty form in January when he powered his way to a devastating victory in the HKG1 Centenary Sprint Cup at the course and distance. That race was almost as notable for the seven-year-olds displays either side of the victory: a pre-race barge on assistant trainer Pierre Ng that sent him crashing through a running rail, and a post-race teeth-bared lunge at a lead pony.
Aerovelocity was a picture of tranquillity as he entered the track this morning.
“He was just very relaxed today, probably the most relaxed he’s ever been, which was a good sign,” said Purton. “I think he’s just happy to be back home, after everything he’s been through he’s just comfortable being back here. But he’s been getting more and more relaxed as he’s gone on and I keep saying to Paul that he seems to be handling things better all the time. It doesn’t worry me that he was like that today – I actually take a bit of comfort out of it, knowing that he’s just cruising along doing his thing.
“If he had been sweating and carrying on I’d have thought maybe he was still worrying about something or feeling something, but he was in a good frame of mind. Fortunately, the colic he had wasn’t life-threatening and I don’t think it’s going to have any repercussions.”
O’Sullivan knows that Aerovelocity’s prep has not been ideal for this upcoming fourth leg of the Global Sprint Challenge but the Kiwi handler will let his charge take his chance, aware that significant benefit will have been derived from today’s trial.
“He’s the sort of horse that can improve sharply on one barrier trial,” said the trainer. “The Chairman’s Sprint Prize is definitely still the target, it’s all he’s got left. He’s seven years old and we’re not going in with the same confidence as his last run here, he had a far sounder preparation for that, but if he draws a gate, he is a race day horse.”
Aerovelocity will face a crack field of rivals that is also set to feature Australian aces Chautauqua and Buffering, old foes Peniaphobia and Gold-Fun, and rising stars Lucky Bubbles and Thewizardofoz.
Back to all news
SHARE
Recent News