Rios’ son spectacular in Group One 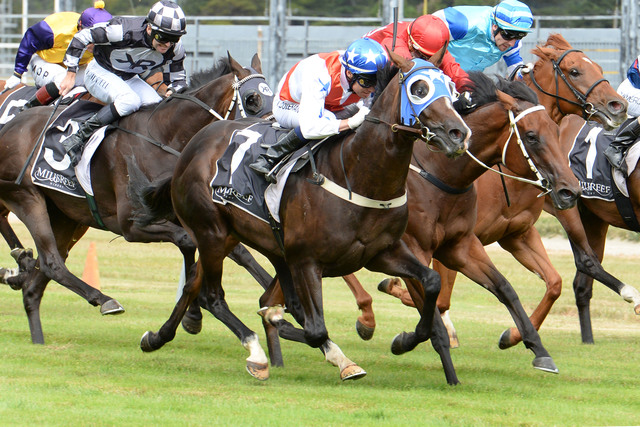 Gaultier
Waikato Stud celebrated another Group One success this afternoon when Gaultier upset his more fancied rivals in the Levin Classic. The son of resident stallion Rios picked a perfect time to shed his maiden status and press his Gr 1 New Zealand Derby claims.
Gelded just two weeks ago, Gaultier showed his style at Trentham where he powered home from the tail of the field. “I was really looking forward to this – he’s just improved so much since we gelded him,’ trainer and part-owner Danica Guy said. “When he hit the front he got a bit lost and there’s so much more to come from him.”
His sire Rios, a stakes-winning son of Hussonet who placed in the Gr.1 New Zealand 2000 Guineas of his year, had his first stud success earlier this year when Happy Place won at New Plymouth. Also trained by Guy, he has since placed in Hong Kong.
Gaultier was purchased at the Ready to Run Sale in 2013 for $17,500, but was subsequently side-lined for three months by injury and didn’t make his first appearance until last November. He placed in one of his next three starts before it was decided that gelding would allow him to realise his full potential. “We always knew he had the ability – bring on the Derby,” Guy said.
He was a 100-1 chance for the Gr.1 TV3 New Zealand Derby before he gave them all a start and a beating under Michael Coleman at Trentham. He is now down to $ for the February 28 classic.
“It was a little bit of a surprise, although he had been working well,” Coleman said. “He worked with Tomorrowland last Saturday and he was only slightly inferior. He’s got a great temperament and he really stretched out.”
Waikato Stud sires enjoyed a stakes double at Trentham where Kawi landed the Listed Anniversary Handicap. “He showed how good he can be today,” trainer Allan Sharrock said. “He’s still got a lot to learn – he over-races and does silly things.” Kawi has now won five of his 11 starts and the Gr 1 Stradbroke Handicap in Brisbane is a potential longer-term target.
Back to all news
SHARE
Recent News

Stakes success for West Wind looks like a formality after the Pins mare added to an already impressive record this evening at The Valley. The patiently-handled 5-year-old won for the sixth time in her 11-start …

A pair of Waikato Stud progressive graduates combined on Thursday to credit the Matamata farm with an inter-state double. Jenni Bad Cat and Wairere Falls, both by resident champion sire Savabeel were successful at Ballarat …