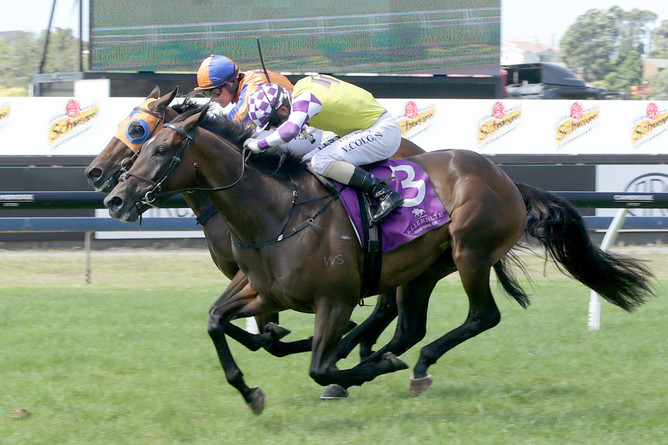 Waikato Stud graduate Surely Sacred’s name is up in lights after his Gr.2 Avondale Guineas victory at Ellerslie.

It propelled the son of Rock ‘n’ Pop to favouritism for next month’s Gr.1 New Zealand Derby.

He is trained by Tony Pike, who also prepared Rangipo to win both races three years ago.

“I think this horse is more of a genuine stayer,” Pike said.

“Rangipo was a true professional. He was having his 10th run for the season when he won the Derby.

“He was a real warrior, but I think this one has a touch of class. I hope we can do it again.”

The winner of the Gr.2 Auckland Guineas on New Year’s Day, Surely Sacred settled back in the field before rider Vinnie Colgan improved 800 metres from home.

“They put the pressure on a fair way out and opened up the field,” Pike said.

“Vinnie elected to get on his bike and that was probably the winning of the race.”

Surely Sacred made the lead 350m out and he held a strong gallop to earn top honours.

“It was a good, tough win and there’s a bit more juice in the tank yet,” Pike said.

“It’s all pretty straight forward from now over the next two weeks. It’s just about maintenance work and keeping him happy.”

Surely Sacred was purchased by Raffles Racing from Waikato Stud’s yearling draft for $160,000 in 2017.

He is out of the Masterclass mare Not Sure and is a half-sister to the Gr.3 Tasmanian Derby winner Betwixt.