Sacred Croix makes it four in a row 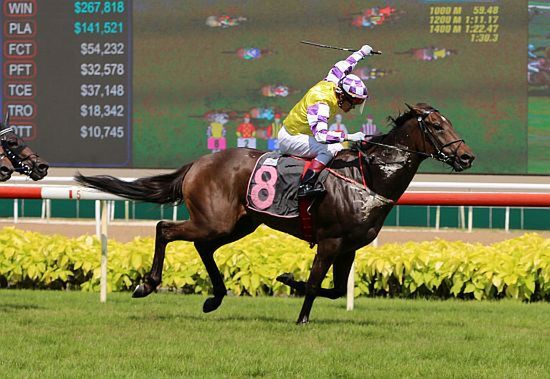 Progressive galloper Sacred Croix (NZ) (Savabeel) showed no letting up in his current brilliant form after he brought up a fourth win in a row on Sunday.

Though rising in grade in the $70,000 Goodman 2014 Stakes, a Class 3 race over 1600m after he last saluted in Class 4 company one month ago, the Savabeel four-year-old was just as lethal when he unleashed a solid acceleration inside the last 300m.

Well ridden by regular partner Benny Woodworth, Sacred Croix came off his smothered run in midfield to stake his claim shortly after straightening.

But the biggest move hailed from Sacred Croix as he stormed onto the scene at the 300m, steadily gaining the ascendancy before he put his rivals to the sword rather easily. Stablemate Richebourg (Real Saga) quickened home late to grab second place 1 ½ lengths away with Destroyer Eclipse (NZ) (Alamosa) winning the battle for third.

Winning trainer Mark Walker said the four-in-a-row was a feat seldom accomplished in Singapore and for Sacred Croix to do so as he rose through his grades was even more commendable.

“It’s never easy for horses to win four in a row when they race here or in Hong Kong because the ratings go up so quickly,” said the Kiwi mentor.

“He’s a nice progressive horse who had a freshen-up. He will run on Kranji Mile day (May 25) and we may then look at the 4YO series for him.

“Richebourg is also going really well. He was meant to run in a Class 3 race over 1400m on Friday but he was balloted fourth, he ran out of his skin.”

Walker and Woodworth were actually at a double having combined earlier with $111 smokie Ancient Warrior (NZ) (Iffraaj) when he stole a march on his rivals in the $50,000 Quechua 2016 Stakes, a Class 4 race over 1700m, with the Kiwi handler later going on to claim the training honours with a treble courtesy of Te Akau Racing Stable newcomer Barbeque (Helmet) in the $70,000 Chase Me 2012 Stakes, a Class 3 race over 1200m. – Racing News