Savabeel 3YO stakes his guineas claim 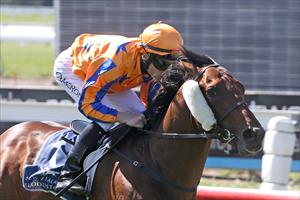 Impressive Savabeel colt Hall Of Fame has done everything he possibly can to make up Matthew Cameron’s mind. He has delivered two impressive victories ahead of next month’s Gr.1 Sothys New Zealand 2000 Guineas and now the stable jockey will have to decide whether he stays with the colt for the classic or if he rides Heroic Valour.
“That’s what he gets paid the big bucks for!” said Jamie Richards, who trains the pair of three-year-olds with Stephen Autridge. Heroic Valour is currently rated a $6 Guineas chance and a quote he now shares with his barn mate after Hall Of Fame’s latest runaway victory in Saturday’s Listed Zacinto Stakes at Riccarton. He had also won the Inglewood Stud Guineas Trial at his previous outing when ridden by pinch-hitter Michael McNab.
Hall Of Fame was only opposed by four runners on Saturday and he travelled easily in front before Cameron asked him to find another gear on straightening. “He had a nice run in transit to be fair, but we couldn’t ask for any more,” Richards said. “I’m not sure about what he beat, but the way he did it shows he’s definitely on the right track.”
Hall Of Fame was out on his own 300 metres from home and he won easing down by five lengths. “He likes clear air so we planned to take the lead and take any bad luck out of the equation,” Richards said.