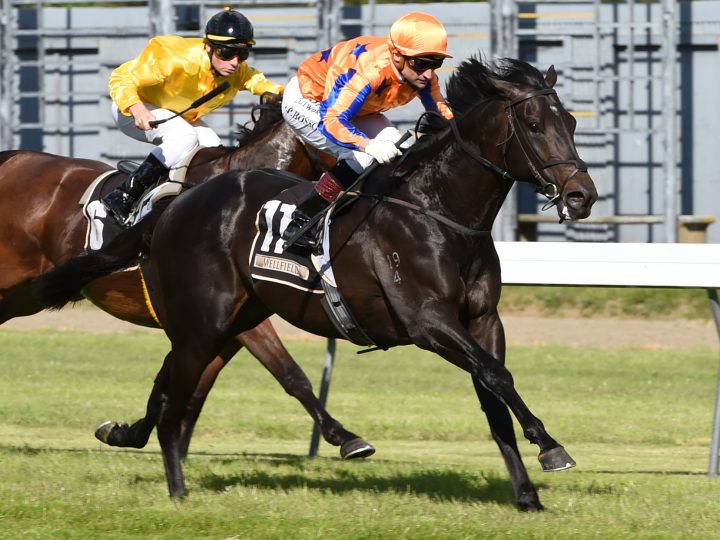 Hopes of a lucrative life after racing for Embellish were significantly boosted at Riccarton where he added a further top-flight victory to his family’s roll of honour. The expensive yearling emulated his sister Diademe by winning at the highest level this afternoon in the Gr.1 Al Basti Equiworld New Zealand 2000 Guineas (1600m) and in doing so the classy colt significantly lifted his stallion profile.
A son of our very own champion sire Savabeel and the O’Reilly mare Bling, Embellish was purchased for $775,000 out of Waikato Stud’s 2016 Premier Sale draft at Karaka by Te Akau principal David Ellis. He was secured with a stallion career in mind and Embellish, whose relative Espumoso earlier maintained his unbeaten record with victory at Te Rapa, is now on the way to fulfilling that intention.
“He’s a very valuable colt and we would love to think that he will be standing at stud in the future,” Ellis said.
The Stephen Autridge and Jamie Richards-trained Embellish trailed Ever Loyal throughout and, when he came off the leader’s back into the straight, the handsome brown three-year-old quickly asserted his superiority to draw clear. “I was in the perfect position and tracked Ever Loyal all the way and I knew I had him covered at the 600,” Bosson said. “I’ve always liked him, he had raw ability as a two-year-old and I knew as a three-year-old he would be a top-class colt.”
He has now won the Guineas seven times and it was the sixth for the powerful Te Akau operation. “It’s a stallion making race and this bloke has a top future,” Richards said. “Opie gave him a super ride in the trail.”
Waikato Stud principal Mark Chittick was elated by the win “We’re all incredibly emotional, it’s a family we have been involved with for 35 years going back to Garry purchasing Star of the Night all those years ago. He was the highest price yearling we have ever sold and to see him go out and win so professionally makes it all the more rewarding for myself and the team”.

Gai Waterhouse and Adrian Bott took a liking to Waikato Stud’s Savabeel youngster, Lot 355, on day two of the Magic Millions Gold Coast Yearling Sale and weren’t to be denied in their pursuit of …