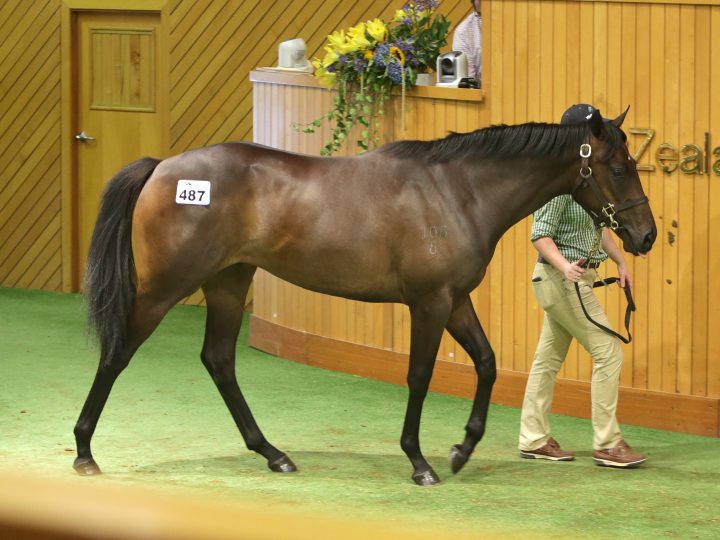 A family that has served Waikato Stud so well was again to the fore at Karaka this afternoon when the daughter of Savabeel and Posy set the ring alight.

The good-looking filly certainly filled the eye of respected Cambridge agent Dean Hawthorne, who went to $875,000 to secure her.

Hawthorne, who has been active over the first three days of the sale with seven purchases to date, explained a simple rationale behind the acquisition.

“In the old days the Australians came and they bought Zabeel fillies,” he said. “Many are rueing the fact they didn’t buy enough of them. I think the baton has been handed down to Savabeel.

“While he is still to be proven as a broodmare sire, as a sire of fillies on the racetrack there aren’t many better. I wanted one good Savabeel filly and she was the one.”

Purchased on behalf of a Melbourne client, Hawthorne also noted the role fellow bloodstock agent Bruce Perry had in his selection.

“I do a lot of work for Bruce Perry, spelling and looking after his horses, and he is the master of picking Savabeel fillies,” he said.

“We had Lucia Valentina at home and to this day she is the toughest filly I’ve ever had anything to do with. I sort of watch what Bruce buys and this is the type of Savabeel filly that he buys.

The filly’s dam Posy is a two-time winner by No Excuse Needed and a sister to the Waikato Stud’s outstanding mare Daffodil. She triumphed multiple times at Group One level and cumulated major wins in the Australian Oaks, the New Zealand 1000 Guineas and the Windsor Park Plate.

Daffodil is in turn the mother of the stakes performer Snowdrop (Pins) and this is also the family of the Group One Ellerslie Sires’ Produce Stakes Good Faith.

Savabeel continues to show his champion qualities and his yearlings are currently averaging $265,000 with three of the five top lots being by him. Waikato Stud are holding a comfortable lead on the leading vendor by aggregate table and currently have a sale average that exceeds $180,000.

Associate sire Sacred Falls’ stock are selling at an impressive average of $125,000.

Stud stalwart Pins also made his presence felt at Karaka this afternoon with a son (Lot 383) of the multiple Group One producer snapped up by Hong Kong’s Ricky Yiu for $420,000 during the Book 1 Sale.

The colt is a brother to the Listed Wellesley Stakes winner and dual Group Three placegetter Maritimo with their dam the O’Reilly mare Miracle Miss. She won five races and finished third in the Group Three Taranaki Cup.

It is also the family of the Matamata farm’s Dating, winner at Group Three level of the Desert Gold Stakes and the Taranaki Breeders’ Stakes as well as a third placing in the Group One Captain Cook Stakes, and the Group One Auckland Cup winner Senator.

The dam, whose three foals to race have all won, is a sister to the Group Two Avondale Guineas and Group Three Taranaki 2YO Classic winner Icepin and the Australian Listed winner Frozone. The pedigree also features the home-bred multiple Group One winner Kinjite (Centaine).

First through the ring was Lot 335, a Savabeel colt who made $310,000 to the bid of NZB’s John Cameron on behalf of the Ibis Syndicate from Hong Kong.

The second son of Savabeel is out Lego’s mother Legs, who won both the Group One Kelt Capital Stakes and the Group One New Zealand Oaks in Waikato Stud’s colours.

Prominent owner Ger Beemsterboer, who raced the Group one New Zealand 1000 Guineas winner Planet Rock, went to $220,000 to secure the daughter (Lot 464) of Sacred Falls and Nadel Dame, an unraced Pins mare who is a half-sister to the former Singapore Horse of the Year Currency.