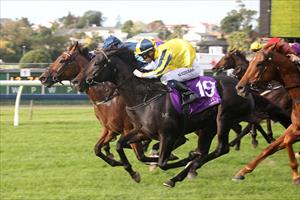 History repeated itself for Wexford Stables when Savabeel gelding Sound Proposition came off the ballot to win the Gr.1 Manco Easter Stakes at Ellerslie on Saturday.
The win came 31 years after Eastern Joy, trained by Dave and Paul O’Sullivan and ridden by Lance O’Sullivan, also got a late call-up into the Easter field and came up trumps.
“Eastern Joy got in at 7.20am on race morning – Dad (Dave) reminded me off that this morning,” said Lance O’Sullivan, who trains Sound Proposition in partnership with Andrew Scott.
“It was a great win and I’m thrilled for all the staff at home. Andrew and all the team have done a great job with this horse and Darren Weatherley rides him in work every morning.
“We were going into it today thinking he’s well out of it in the handicaps, but Mickey [rider Michael Coleman] was a bit bullish about his chances. He said he likes Ellerslie and it’s good to have Mickey back on again today.”
Sound Proposition has started just five times since his Derby performance when 3rd across the line and he showed he was back on the right track when winning a Rating 85 1600 at Ellerslie earlier this month.
All told he has won four starts at the mile distance for owners C & J Tobin, T & S Tobin, R & I Trayling.
“He came into the race through the back way – he wasn’t in any of the big races coming in,” said O’Sullivan. “He had to earn his spot in the race.”
Settled back by Coleman, Sound Proposition unleashed his winning run wide out and nabbed outsider Trojan Warrior in the last stride to score by a head.
It was the fifth win in the Easter for Wexford Stables following on from Shivaree (1981), Our Shah (1982), Eastern Joy (1985) and Calveen (2005).
Trojan Warrior produced a huge effort for second as he was unsuited by the set weights and penalties conditions of the Easter.
Rasa Lila charged home late for third, a short neck from the runner-up, while Sakhee’s Soldier was right in line in fourth position, just under a length clear of Mabeel. – NZ Racing Desk.
Breeding Beat