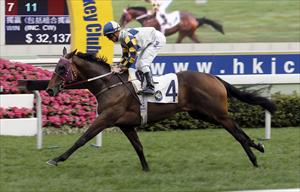 Today’s headline race is the G1 Audemars Piguet QEII Cup but there are some class acts on the 10-race Sha Tin undercard, too, not least the HKG3 Queen Mother Memorial Cup (Handicap), which features a select field of nine.
Among those is the John Moore-trained Victory Magic (Savabeel), a head second to AP QEII Cup candidate Werther in last month’s HKG1 BMW Hong Kong Derby (2000m) and a winner since.
That victory last time out, an impressive Class 2 score at 2200m, was the four-year-old’s first at his 15th attempt, not counting a race subsequently awarded to him by Australian stewards. A career return of eight second-place finishes prior to that last start win had many judges questioning Victory Magic’s fortitude, though not his ability.
“He’s a horse that has always shown a lot of ability and the race last time went well for him and he put them away,” said jockey Zac Purton who will be in the plate for the third time at the weekend.
“I think in some respects that win has been good for him but in other respects he’s still quite an immature horse – physically and mentally. I definitely think we’re going to see a better horse in 12 months’ time, so as time goes on I think he’s just going to get better.”
Sunday’s contest is one of only three races at a mile and a half staged in Hong Kong. Victory Magic has ventured over such a distance once before, 2500m to be precise, but that resulted in an inclusive 10th in the 2014 G1 Victoria Derby, his final start before he was shipped to Hong Kong.
“You wouldn’t think the extra distance would pose a problem,” said Purton. “He was pretty strong to the line the other day, but until you race them over it you never really know. The race the other day was a little bit stop-start and they went pretty slowly through the middle sections so a truly run race is a different race altogether; but I feel that if it was a truly run race it would better suit him, he would relax a little bit better and could finish as well, so I go there hopeful he can do it.”
Victory Magic will face another of the BMW Hong Kong Derby defeated, the Tony Cruz-trained Giovanni Canaletto (124lb). The former Ballydoyle galloper was strung up behind runners at a crucial juncture when sixth in the race won by Victory Magic last start, that after staying on to finish three lengths third in the Derby.
Harbour Master (124lb) and Basic Trilogy (113lb) will also represent the Moore stable.
The Peter Ho-trained Flame Hero tops the weights with 133lb, while Mr Gnocchi (117lb) from the Tony Millard stable, the Richard Gibson-trained Ambitious Champion (114lb), the Caspar Fownes-trained Renaissance Art (113lb) and the Cruz-trained Anticipation (113lb) complete the line-up.
Back to all news
SHARE
Recent News