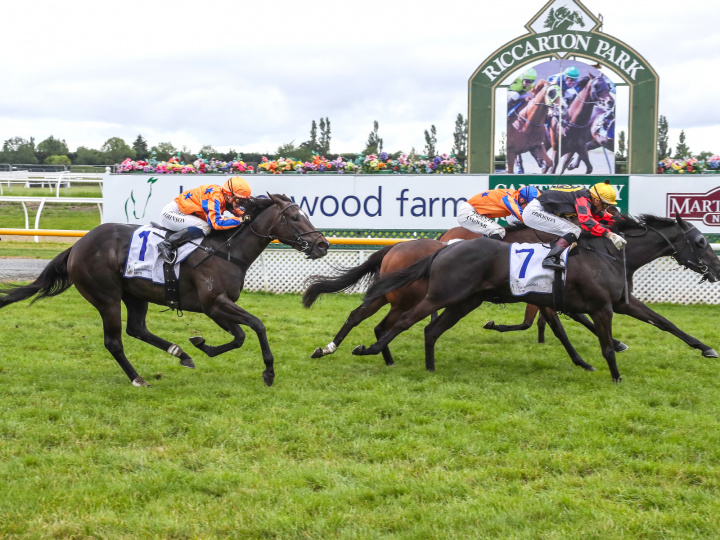 Savabeel’s domination of this season’s Riccarton Classics was completed when his daughter The Perfect Pink produced a career best performance at southern headquarters on Saturday afternoon.

Both 3-year-olds are prepared by Te Akau Head Trainer Jamie Richards and were partnered by the powerful operation’s number one retained jockey Opie Bosson.

“It’s not all about me, it’s about the amazing group of staff we have and the owners and everybody else involved,” said Richards, whose Group 1 tally now stands at 50.

“We have always had a lot of time for this filly and she’s needed time to mature. We weren’t originally going to bring her down, but I’m thrilled that we did.

“I thought she was the one to beat on good ground and now she’s done it on soft ground.”

Bred and raced by the Dennis brothers and Milan Park’s Rony Rider, The Perfect Pink raced three wide in midfield before improving 650 metres from home and she produced a sustained finish to claim top honours.

“It’s an amazing feeling and I had to make a long run on her. The plan was to go wide to get out on to the better ground and I had Savabeel on my side,” Bosson said.

“I’ve had a great association with Te Akau and Jamie, he’s a gun trainer.”

The 26th individual Group 1 winner for Savabeel, The Perfect Pink is out of the O’Reilly mare The Solitaire, who won three times at Listed level and was Group 1-placed.

She is a three-quarter sister to The Jewel, whose brace of Group 1 victories also included success in the New Zealand 1000 Guineas.