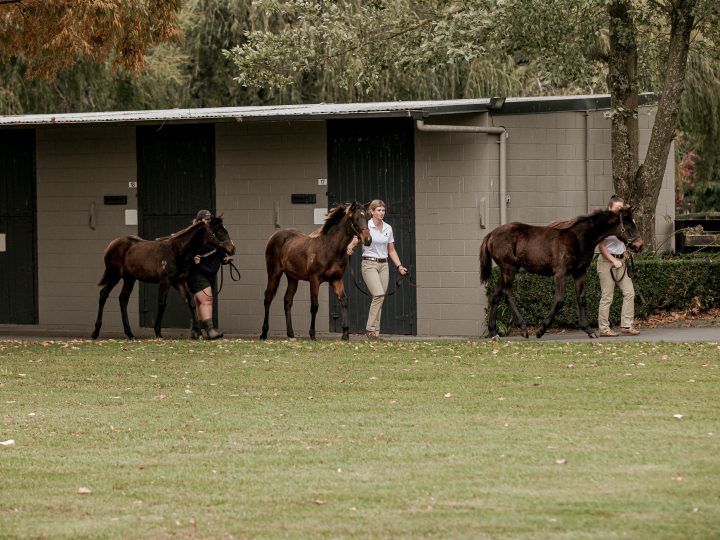 The Matamata farm’s 26-strong weanling draft proved popular on gavelhouse.com, as was the pre-auction interest.

“Across the board, I think we averaged $9200 and there’s always a couple make a little below what you hope for,” Business Manager Mike Rennie said.

“It’s the first time we’ve done it so it’s a new experience and we were pretty happy with the way it went, we sold them all.”

The pre-auction parades last Thursday, Sunday and on Monday were all well attended.

“We would have had more than a 100 people here and it turned more into open days,” Rennie said.

“We had the stallions in and a lot of people took the opportunity to chat to us about matings.

“We had a number of pinhookers and end users looking from the perspective of buying to race and then adding the fillies to their broodmare bands.

“It offered the chance to get involved with some very good Waikato Stud families.”

The top lot of the sale was a colt by Kermadec out of the Savabeel mare Handpicked, who sold to Alabama for $47,500.

The youngster is from the potent family of the Group 1 winners Diademe and Embellish and the star sprinter Sacred Star.

A son of Group One winner Tivaci and Black Belt, a sister to Group One performers Celtic Prince and Said Com, went to Kilgravin Lodge for $38,000.

The Gr.1 NZ 2000 Guineas winner Master Belt is the star on the pedigree page and the youngster may be re-offered as a yearling.

The third top lot was an Ocean Park colt, who sold for $21,000 to White Robe Stud manager Wayne Karen Stewart and his wife Karen.

He is out of eight-time winner Girls On Top, who is a half-sister to the former Singapore Horse of the Year Currency.