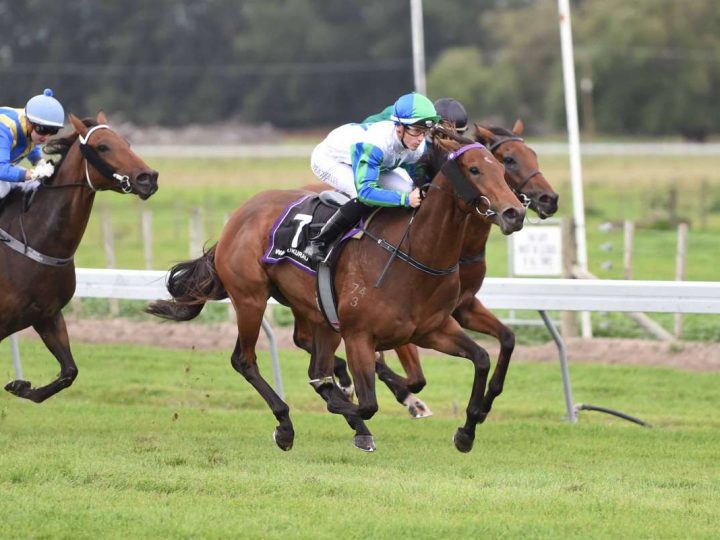 Flamingo
Flamingo will be kept to her own grade in the immediate future before sterner tests are put to the talented daughter of Pins. The aptly-named mare created a good impression last season when she won her first two starts and was then given a break after finding the line strongly from the back to finish third in the Gr.3 Cambridge Breeders’ Stakes.
Flamingo is trained by David and Emma Haworth for her breeder, Waikato Stud principal Mark Chittick. “There are no big plans for her just yet,” Emma Haworth said. “We’ll have a talk with Mark and some decent races will be on the cards for her later this year.” Chittick also bred and raced Flamingo’s mother Bird, who won the Listed Warstep Stakes from the Haworth stable in 2009 in a victory that earned her the NZ Bloodstock Southern Filly of the Year title.
As long as she gets conditions to suit, Flamingo will make her four-year-old debut in Saturday’s Hastings – Heart of Hawke’s Bay 1300. “We won’t be going anywhere if it’s wet,” Haworth said. “We’re not in a hurry with her, she’s ready but we’re not racing her for the sake of it.”
Flamingo furthered her spring preparation at last week’s Foxton trials where she finished third in an open heat over 1000m under Rosie Myers, who has been booked for the mount at Hastings. “It was very wet so we told Rosie to take it easy and let her run home under her own steam,” Haworth said. “Rosie was very pleased with the mare.” Flamingo will be opposed at Hastings by stablemate Profile, who also finished third at the Waverley trials.
Back to all news
SHARE
Recent News