Smart Two-year-old to be set for early Guineas feature 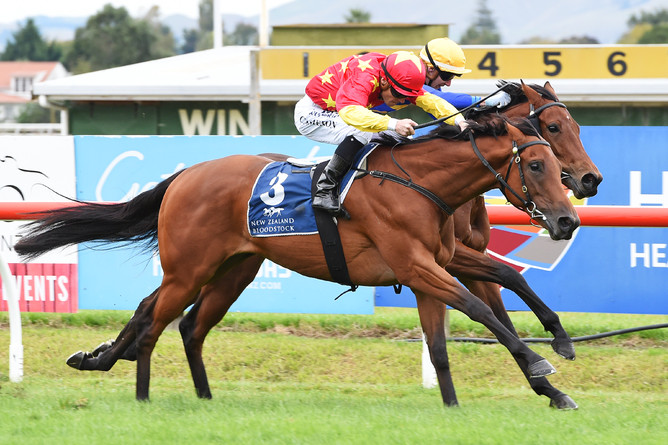 Exciting two-year-old Madison County has been earmarked as a potential Guineas candidate next season after clinching his first race day success at Hastings on the weekend.

Co-trainer Andrew Forsman has plenty of time for the showy Pins gelding and believes he is a perfect candidate for some of the early three-year-old features next season.

“He’s always shown us he has ability, but he has been pretty green along the way,” he said.

“That was the main worry heading into Saturday’s race as he had been a little erratic on debut at Rotorua and I was concerned that might cost him this time as well as he was up against a fairly handy field.”

Forsman’s worries were unfounded as Madison County and rider Matt Cameron delivered a stylish performance to take out the two-year-old 1300m contest in convincing fashion. Settled nicely behind the leaders throughout the race, Cameron peeled his mount out to challenge on the home corner where he took control to score by a narrow but authoritative margin over runner-up, Langkawi.

“He’s not really a wet-track type so he probably got away with it on the Dead5 surface,” said Forsman.

“I think we’ll put him aside now as the tracks get worse. He will be going out at a good time where he can have a decent four to five weeks in the paddock before we bring him back for a spring campaign.

“On what we’ve seen of him I don’t think he will be out of place in some of the early Guineas races so that will be the long-term target for him.”

Madison County is raced by the China Horse Club Racing PTY Ltd operation and was a $36,000 purchase for the group from the Waikato Stud draft during the Select session of the 2017 National Yearling Sale at Karaka

A son of Pins, he is out of the unraced No Excuse Needed mare Red Delicious.