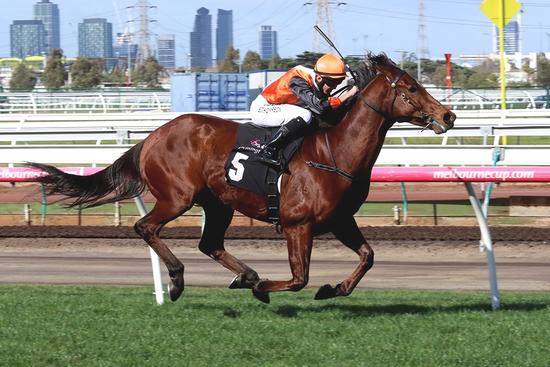 Rejuvenated Pins six-year-old Pin Your Hopes continued his hot form at Caulfield on Saturday. He has now won four of his last five starts after retirement was being mooted for him three months ago.
He was out of form and trainers Mathew Ellerton and Simon Zahra were losing patience with the gelding. As a last resort, they decided to freshen the horse and a break has worked the oracle.
“He must have heard us suggesting we might retire him,” Ellerton said. “He was really struggling, he just didn’t seem interested, but somehow he has just turned the corner. I’ve been coming to the races thinking the run has to stop at some stage, but he just keeps stepping up to the plate and doing the job.”
Pin Your Hopes was entered for two races at Flemington today, but the stable pulled the right rein when they elected to take on the harder open handicap over 1800m rather than sticking to the BM90 at 1600m. “I just thought having 54kg and then claiming 2kg down to 52kg was going to give him a better chance and it has paid off,” Ellerton said.
Back to all news
SHARE
Recent News