Son of savabeel shows his quality 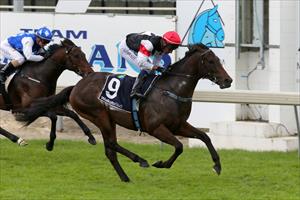 Savabeel colt Ali Baba boosted his chances of a shot at a Group One prize with his hometrack victory this afternoon. He downed his three-year-old rivals with a dominant performance at Matamata to stake his claim for the New Zealand 2000 Guineas.
Trained by Michael Moroney and Chad Ormsby, Ali Baba had finished out of the money on debut but he was expected to show major improvement over more ground. “When he went around over 1200 metres at Taupo we knew it would be too short for him, the 1400 metres was always going to be more of his go,” Ballymore Stables’ racing manager Nick Fairweather said.
“We wanted to see him against these type of horses to see whether he was ready for the 2000 Guineas. Mike and Chad have always had an opinion of him. He’s been a little bit green and to their credit they had the horse forward enough today.”
Bred by Murray Jones, Ali Baba was a $70,000 purchase by Paul Moroney Bloodstock from Kirkwall Thoroughbreds’ 2014 Karaka Select draft and now counts one win from two starts for owners Ballymore Stables (Aust) Pty Ltd, Murray Jones, B G & Mrs D G Neville-White.
Ali Baba is out of the Maroof mare Dreamworks, whose three wins included the Gr.2 Royal Stakes. A daughter of the Group One performer Slanchyvah, she is from the family of the multiple Australian Group Two winner Grey Song, who also placed five times at the highest level.