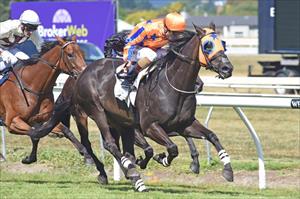 Savabeel dominated today’s meeting at Awapuni with a black type double and an outstanding debut winner. The home-bred Splurge took top honours in the Gr.2 Manawatu Challenge Stakes, Clarify claimed the Gr,3 Manawatu Cup and the two-year-old Sword Of Osman turned in an electrifying performance to score on debut.
Trained by Stephen Autridge and Jamie Richards, Splurge’s latest victory has confirmed a tilt at the Gr.1 Thorndon Mile at Trentham. “Getting up to a mile will suit him and if he races as tractably as he did today then he’s going to be a very good chance,” Richards said.
“He’s going the right way and it’s a big thanks to the team at home as he’s not the easiest horse. We’ve got to think outside the square with him, he enjoys variety and a bit of jumping.”
Splurge was ridden by Michael McNab, as was Sword Of Osman, and he was particularly satisfied following their narrow last-start defeat in the Gr.2 Eagle Technology Stakes. “He deserved that after the other day,” he said. “It was heart-breaking when Hiflyer caught me.”
Splurge was purchased out of WS’s 2014 Premier Sale draft by Te Akau principal David Ellis for $500,000. He is a son of the Group Three-winning O’Reilly mare Splashing Out.
Meanwhile, Clarify also has a Group One target on his programme next year. “He’s nominated for the Auckland Cup and we’ll work our way toward that,” Matamata trainer Peter McKay said.
Clarify was ridden by his son Shaun, who made the most of the five-year-old’s staying qualities. “It was a good ride from Shaun, we didn’t want to be stuck on the rail so I told him to get off and get going early,” McKay said. “He let him slowly stroll forward to be in the fight on the turn. He’s a tough horse and that’s the way to ride him.”