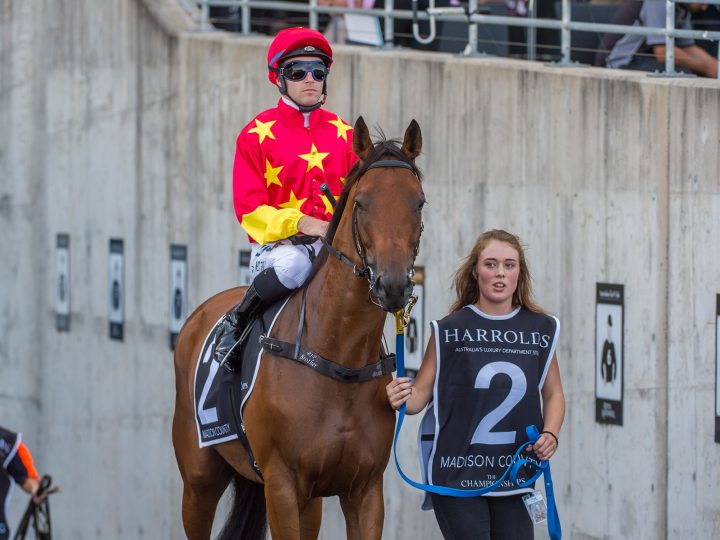 The Murray Baker and Andrew Forsman-trained gelding also acquitted himself well during an Australian campaign that saw him finish runner-up in both the Gr.1 Australian Derby and the Gr.2 Tulloch Stakes.

Out of an unraced mare by former stud resident No Excuse Needed, Madison County was a $36,000 Karaka purchase for the China Horse Club.

“It’s been another huge season for the team and we’re so thrilled with the results achieved by horses bred and sold by Waikato Stud,” Mark Chittick said.

“It is very rewarding to see all of our stallions’ progeny doing so well. Breeding horses is our passion, and we love seeing people enjoying success with Waikato Stud sired horses.

“Madison County has been the standout three-year-old in New Zealand this year. What he has achieved on the track is staggering and we can’t wait to see what he achieves in the upcoming season.”

The daughter of the unraced Pins mare Eudora was bought for $65,000 by the Bruford and Coupland families and was subsequently sold at the end of her career at the Magic Millions Broodmare Sale for A$1 million to the closing bid of Coolmore Stud.

Surely Sacred was a $160,000 Karaka purchase for Raffles Racing and he made giant strides in his classic year to win the Gr.2 Auckland Guineas and the Gr.2 Avondale Guineas and also ran second in the Gr.2 Bonecrusher Stakes.

The Tony Pike-trained Rock ‘n’ Pop gelding campaigned successfully across the Tasman and was rewarded with a third placing in the Gr.1 Australian Derby.

Zabeel’s son Ocean Emperor ended his final season before going to stud with a victory in the Gr.2 Tauranga Stakes. The classy entire was purchased for $450,000 at Karaka in 2013 by trainer Gary Hennessy, who will stand him at stud.

The Waikato Stud colours were to the fore with Savabeel’s quality daughter Love Affair, who won the Gr.3 Eagle Technology Stakes and was runner-up in the Gr.3 Spring Sprint. The farm also enjoyed stakes success with Pins mares Residential and Flamingo who will join the WS broodmare band this spring.

Preditor was the major flagbearer in Singapore with the son of Savabeel winning the Gr.3 Jumbo Jet Trophy and the $75,000 WS Karaka purchase also placed in the Gr.2 Chairman’s Trophy and the Gr.3 Moonbeam Vase.