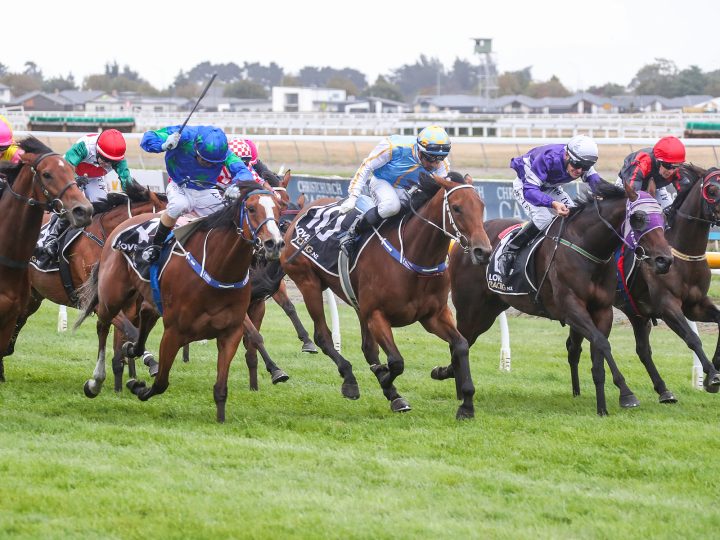 Out of the Park (centre)

A special stakes winner number 11 for the season for Waikato Stud with our very own Business Manager co-owning today’s Gr.3 Valachi Downs South Island Thoroughbred Breeders’ Stakes winner Out of the Park (Ocean Park) with his good friend Jack Stewart.

In winning the Gr.3 Riccarton feature, Out Of The Park completed a trans-Tasman black-type double for Waikato Stud.

Her victory this afternoon followed on from the Savabeel mare Missybeel’s win in the Gr.3 Epona Stakes at Rosehill.

A daughter of Ocean Park, Out Of The Park came with a strong run to prevail narrowly in a three-way photo finish.

Trained by Robert Dennis, the five-year-old was ridden to her fourth career victory by Krishna Mudhoo.

“It is my first black-type win and the same for Krishna, so it is a pretty good feeling to have achieved it,” Dennis said.

“She is a mare that has had a few quirks and problems, but she is in a small operation now.

“She gets to do her own thing and go out into a big paddock each day and I think that really suits her.

“My trackwork rider Alex has done an amazing job with her so he deserves a lot of the credit as she is not easy at times.”

A $100,000 Karaka yearling purchase before being sold as a tried racehorse to Rennie and Stewart for $14,000 on Gavelhouse, Out of the Park is a daughter of Under And Over who has a 100 per cent record at stud.

All four of her foals to race have been successful with Out Of The Park now the star of the brood.

The headline act in the pedigree is the Gr.1 Auckland Cup winner Chenille.