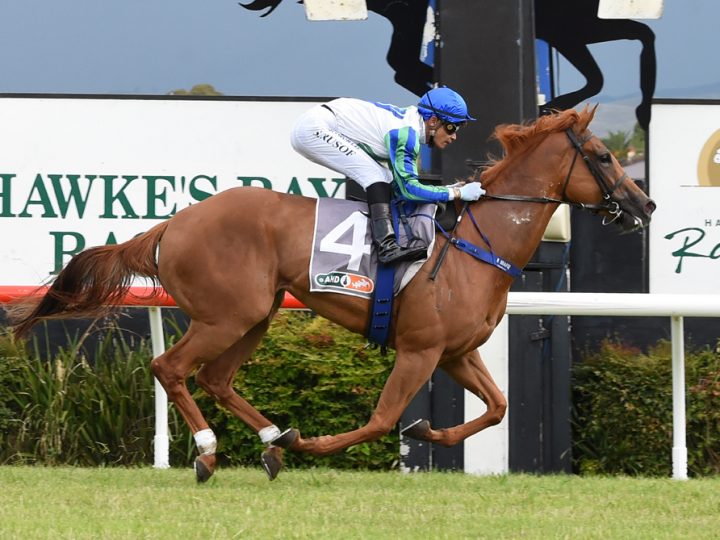 In training for Waikato Stud, Together (4 m Ocean Park – More to Love, by Danasinga) showed signs of plenty more to come when winning the $10,000 Black & White Group Maiden 1300 metres on 12 December at Hastings.

Looking above average when winning both her trials before racing, she came from well back with a strong finish for third when resuming in the Maiden 1100 metres on 23 November at New Plymouth, running her final 600m in a very competitive 34.7, and broke through at her third start.

Together travelled sweetly three back on the inner, while race favourite Naval Fleet (Declaration of War) dictated terms in front. Four lengths astern at the 600m, Shafiq saved ground near the rail before quickening to a challenging position and fortuitously she was left in front when Naval Fleet broke through the rail 75m out.

“She’s had a reputation at home and I’m really pleased with her win,” said Te Akau trainer Jamie Richards.

“Mark (Chittick) was patient with her, given her a good spell, and allowed us to take our time. We had a bit of a hold up with her early in the spring, but they’ve been rewarded and she’s a lovely filly that will keep developing.

“She was stiff first-up in a nice race at New Plymouth, and it was a lovely ride by Shafiq being able to save ground and produce her into a challenging position and while not the way you’d like to win races (with Naval Fleet coming to grief) it was a great end result.

“Staff at home has done a really good job in managing her and she really does enjoy getting her toe into the ground, so track conditions were ideal for her.

“It’s a big thrill to get the win for the team at Waikato Stud. I worked there for a little while before coming to Te Akau, and know a bit about some of the mares they’re breeding from. The filly has a lovely pedigree, a good-looking type, and hopefully, if we can keep her sound, there are plenty more wins in her.”

Bred and owned by Waikato Stud, she is from the lightly tried but talented Danasinga mare More to Love. Her grand-dam, Flying Floozie (Pompeii Court), made a huge name for herself as the dam of world-class galloper Starcraft (Soviet Star), a five time Group One winner that claimed titles of Champion 3YO in Australia, Champion Sprinter in New Zealand, and Champion Miler in Europe.

“We’ve always liked the filly since we did the early preparation with her and Jamie (Richards) has been complimentary of her when she went into the stable,” said Mark Chittick.

“She’s from a wonderful family, although it’s been a couple of years since the last good horse. But, we have a lot of the family and great families always come back and that’s the reason we kept her: she’s a good, strong filly and hopefully she can go on as a racehorse.

“She’s required a patient approach, but the whole family, to be fair, has been four (years old) before they get going. So, we didn’t have any expectations early on because we know the family well and been dealing with it for quarter of a century, and she’s typical of it.”

Her sire Ocean Park (Thorn Park) hardly requires introduction. Horse of the Year (2012-13) after four consecutive Group One wins: Makfi Challenge Stakes (1400m), Underwood Stakes (1800m), Caulfield Stakes (2000m) and Cox Plate (2040m), many of his progeny have exuded a strong resemblance to his dam sire Zabeel (Sir Tristram) – being from the brilliant filly and New Zealand Broodmare of the Year Sayyida – and his progeny are impressing. With the oldest just turned four, Ocean Park has comparable stats at the same stage to Champion stallion and associate sire Savabeel (Zabeel).

“Jamie is doing a great job in his first season as the sole trainer at Te Akau, and I like dealing with him,” Chittick added.

“It’s really nice for us to reciprocate business and success back the other way, because David (Ellis) is a big supporter of ours at the yearling sales and at the most recent Ready to Run Sale, so we have a number of horses in training with Te Akau and it’s very professionally run by Jamie and his whole team. It’s great to have success with them.”

Together was strapped by Tracy Collis.