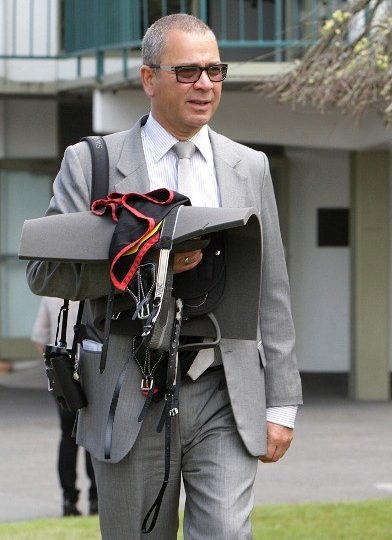 Respected horseman Roger James is just one of many thoroughbred trainers disillusioned with the state of the racing industry.

(By Brian De Lore, The Informant)

If 2018 goes down as the most pivotal year in history for racing and breeding, then all the action has yet to occur because the absence of change has so far brought with it a deafening silence, as the first three months of the year roll over.

April is now upon us as we wait for significant, anticipated changes that will revitalise this racing game and put it back to where we all believe it should be – in a position of sustainability and encouragement for owners, trainers, jockeys, stable staff and every other participant that makes this business tick over.

A former industry leader expressed this view last week: “It’s not that the NZRB aren’t trying, it’s just that the business model they are pursuing is 10 years out of date and they don’t recognise it, and the culture they have developed has isolated them from the three codes and made them defensive against an ever-increasing barrage of criticism from industry stakeholders.”

And if all the racing codes don’t share that view then we can only be sure the thoroughbred sector does.

If you could make the analogy of NZRB being a racehorse, then without stipendiary approval they have adopted numerous gear changes – fully blinkered, ear muffs and a tongue tie. Blinkered in the manner they have focused only on their predetermined priorities against NZTR advice, earmuffed to drown out the howls of industry condemnations, and tongue-tied in their refusal to enter into a full discussion about the needs of the thoroughbred code at all levels.

While on the subject of industry dissatisfaction, especially since the release of the Deloitte Report, unhappy rumblings are reverberating from the ranks of trainers in an ever-increasing volume. In August last year after receiving mandates from Trainers’ Association branches, a proposed vote of no confidence did not proceed when NZTR advised it would be untimely.

Now the trainers are looking to once again reignite the NZRB vote of no confidence with talk of subsequent action in the absence of change for the better. What that action might be is undecided at this point but it may involve the withdrawal of the product.

If you are a trainer reading this and the vote and potential strike action is news to you, that wouldn’t be a surprise. Ardmore trainer Stephen McKee confirmed to The Informant this week that the Trainers’ Association had not canvassed its members.

“I had heard Chinese whispers about certain trainers wanting to take strike action but I’ve had no contact from anyone,” he said. “No-one has been in touch with me; I haven’t heard a dickie-bird.”

The Deloitte Report has further highlighted the plight of the industry and particularly that of trainers. They are seeing and experiencing the corrosion first-hand. They are the ones able to fully gauge the depletion of the ranks of owners, and they are also the ones who know through their own experiences, rather than reading it in an academic report from Deloitte – albeit agreeing with the findings – that under the current regime racing is not sustainable.

The anecdotal evidence suggests trainers now have an increased ownership interest in the horses they train. “Yes, we do race a lot more horses now ourselves than we used to,” continued McKee. “Dad has always been an owner but there have been times when he’s had to be as well. But we’d prefer to be in a position where we just train them for owners, to be honest.

“We train about 35 at the moment. Out of that we would be racing 10 of them. It’s definitely because of a lack of owners and most of the stable is divided amongst only three owners –they would have 20 between them.

“There’s been quite a lot of decline; I don’t get the same support from the breeders now. There are a lot more syndicates today and your single owners have dropped away appreciably – even the small syndicates have dropped off and now you see groups of 10 or even more – the overall interest has waned along the way.

“The problem I see with racing industry people is that they keep saying they need government help but they don’t go to government organised in any way, so they’re not taken seriously. Government then say racing can’t run their own ship properly, so why would give them money.”

Former top jockey and now Pukekohe trainer Nigel Tiley is another stakeholder dissatisfied with the NZRB and is ready to take action.

“After reading the Glenda Hughes response to the Deloitte Report, if ever I’d been a little reluctant in the past to take action, that has now passed and now is the time to do it,” he said.

“I’m over it. We have a lot of young trainers licensed and we have a duty to make sure they stay in the game. Glenda Hughes’ reply was the biggest load of rubbish I’ve read. We all voted for Winston so he owes it to us to do something.

“I have 38 horses in work but only 25 will race in New Zealand. From those 25 Lee and I own or part-own 11 of them. That’s nearly half – the others are all going elsewhere and won’t race here.

“Before the past five years and compared right back to when I started training, I would have owned about five per cent of my horses as opposed to now when we are getting up towards half the stable. It’s hard to keep owners in the game now.

“Let’s get rid of all the top-heavy administration costs,” concluded Tiley.

Over the years Cambridge trainer Roger James has prepared a lot of very good horses for major owners, but the normally reticent horseman now believes it’s time to speak out and take action before it’s too late.

“I came out of a recent meeting with some local trainers with the view that if nothing came out of the next NZRB meeting then we should go ahead and ask our members for a vote of no confidence in the NZRB,” confided James “That can only take place after an executive meeting of the Trainers’ Association.

“The situation now compared to 10 years ago is tenuous and becoming increasingly unviable. Without a doubt the decline has been a continuous one. The ability to earn a living from training has become markedly more difficult.

“That’s why there’s been a drift away from training here and an increase in numbers going to Australia. People underestimate the weight of the history of racing and the experience our old heads have – we are foolish if we don’t draw on some of that,” lamented James.

James’s reference to the ‘old heads’ is simply to bring back an administration that values the history and understands the grassroots of the business so that decision making at the highest level is made with a full understanding of the mechanics and people at the coal-face of racing.

For too long we have put up with a succession of lawyers, accountants and professional directors who have added very little over a long period of time and in fact have cost the racing industry dearly. The succession of financial failures includes the Typhoon betting system which resulted in a $14 million-plus write-off in 2012, although the real cost was thought to be more like $20 million.

The NZRB does as it pleases because the Racing Act of 2003 gives it that right – it virtually says do what you like with very little accountability or transparency back to the codes. The National Party showed little obvious interest for racing over nine years in Government and five years ago the then Minister for Racing Nathan Guy appointed National Party board member Glenda Hughes as the Chair of the NZRB.

In turn, John Allen was shoulder-tapped for the CEO job and that started a succession of shoulder-tapping appointments that today, in this writer’s opinion, has not only provided the NZRB with sub-standard governance and management but given us an organisation that’s little more than an over-blown National Party gravy-train riddled with nepotism, cost over-runs and wastage.

I won’t be the only one that’s noticed a lot of NZRB appointments have come from such places as the Post Office, Kiwi Bank, the Ministry of Foreign Affairs and Trade and other government departments. There’s a club happening and a lot of shuffling around.

The NZRB has developed its own culture and it’s not that nice – one of alleged intimidation towards some of its employees and a workplace environment that’s been described by one former employee as toxic.

By May our Racing Minister Winston Peters should have a short-list of possible replacements for the NZRB board that will undergo some vacuum cleaning work when six of the seven positions come up for re-election in July. We can only hope the fresh appointees are the right people – vested with racing interests, impartial and doing the job for the right reasons.

To read this and other important industry stories in The Informant each week email admin@racingmedia.co.nz. Mention W@W and get 20% off an online subscription.