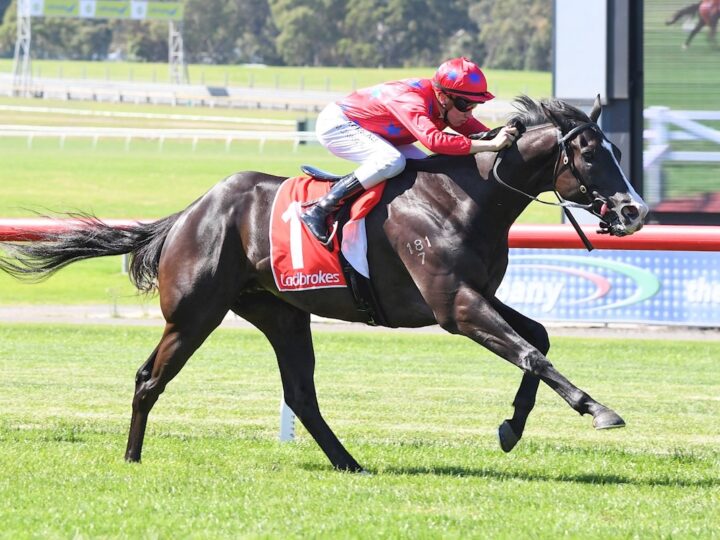 South Parade completed an impressive hat-trick of win of front-running victories when he went from
barrier rise to winning post at Sandown this afternoon.

The John Sadler-prepared son of Sacred Falls is undoubtedly in a fun space and he never looked in
any danger of defeat, carrying his 59kg to further success in the Ladbrokes Cash In H.

The 3-year-old was bred and sold by Waikato Stud and has been partnered in all three of his wins by
apprentice Matthew Cartwright, who again rated him to perfection and when asked to lengthen
stride South Parade obliged effortlessly.

“There’s nothing like a bit of confidence. It’s like a young bloke in a fight and they think they’ve
beaten Muhammed Ali, horses are a bit similar,” stable representative Mick Nolan said.
South Parade was clear into the straight and when Cartwright pushed the button he scooted away to
be 1.25 clear at the line.

“You’ve just got to keep him in a happy rhythm and he quickened up well again and they couldn’t
catch him,” he said.

South Parade was purchased at Karaka for $130,000 by Sadler and Suman Hedge Bloodstock and is
out of the Savabeel mare Celebrate, an unraced half-sister to the Listed Lightning H. winner and sire
Keano and to the dam of the unbeaten Ocean Park youngster Ocean Beyond, successful in the Listed
Mitchell McKenzie S.

Celebrate’s dam O’Really is a three-quarter sister to the Group 1 winner Critics and the family of
Waikato Stud’s champion sire O’Reilly.