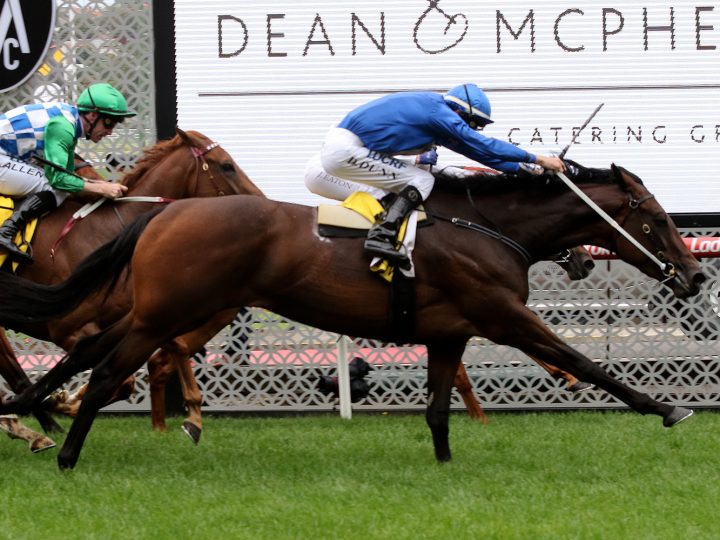 Caulfield trainer Mick Price has a good opinion of tough Moonee Valley winner Oceanex and believes the daughter of Ocean Park can tackle feature fillies’ races in the autumn.

The three-year-old filly closed well to win the Dean & McPherson Catering Handicap (1600m) on Saturday in the hands of Dwayne Dunn.

“She didn’t handle the corner at all well and I just had to take my medicine and the way she finished off she showed how good she is.”

The lightly-raced Oceanex had previously scored by seven lengths at Geelong over 1700m on a Heavy9 track, and she handled the step-back in distance and the Good4 surface at Moonee Valley with aplomb.

“The win on the Heavy9 and doing it the way she did was awesome but you’re always a bit concerned coming back to the mile around a little tight circuit,” Dunn said.

“But she handled herself really well and she’s got a great attitude and obviously the ability is there as well.”

Price was pleased with the way the filly had come through the race on Sunday morning.

“Body-wise she has just started to mature into a nice Christmas three-year-old now and she looked great this morning,” he said.

“She’s not tucked up, she ate up well and she is sound, so I think we can train on.

“I have just got to work out a program. If you kept going and going I’d end up with no horse by March or April and I don’t want to do that.

“I reckon it would be nice to think we could get her peaking for the Vinery Stakes (Gr.1, 2000m).

“I would say the Vinery would have a big circle around it at this stage.” – NZ Racing Desk