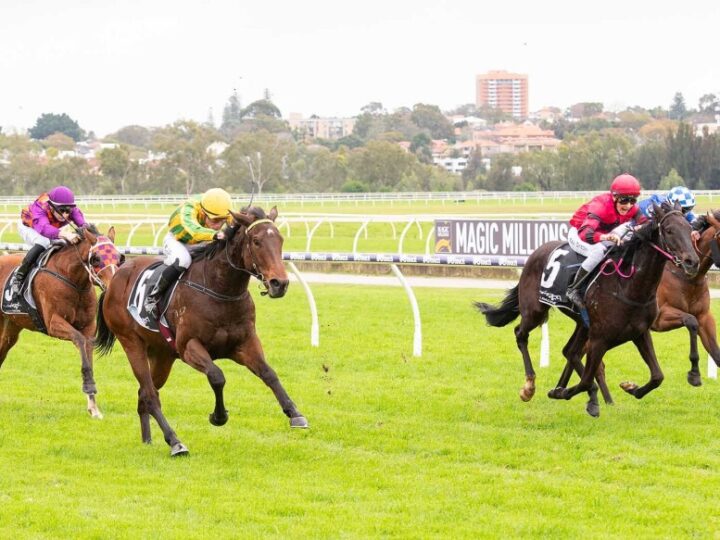 First winner for Tivaci as Celevacci (left) wins on debut at Belmont.

Waikato Stud stallion Tivaci is on the board following the debut success in Australia this afternoon of his 3-year-old son Celevacci.

The youthful Tivaci had sired four previous placegetters from a handful of representatives before Celevacci, who had been a lead-up trial winner, was victorious at the first time of asking over 1400 metres at Belmont in Western Australia for part-owner and trainer Adam Durrant.

“It’s really great news and I’ve been saying all along that Tivaci’s progeny will be typically like him, he won his first race as a spring 3-year-old,” Mark Chittick said. “I think you will see some real momentum now and there are a lot of good prospects out there.”

The Waikato Stud-bred Celevacci is out of the unraced Savabeel mare Celebrate, who hails from the potent Waikato Stud family of the dual Group 1 winner and Champion Sire O’Reilly.

Durant’s stable representative Jason Miller said Celevacci had showed an abundance of talent, but was still a work in progress.

“He’s showed a lot at home and he’s still a big, gangly boy. That was showing up the straight – he got there a bit early and he was green and did a good job to sustain his finish from the top of the straight to the line.

“He’s bred to run and we had his half-brother Pinzu, who was a top horse for the stable.”

Celevacci was initially purchased off the Gavelhouse online platform as a weanling for $14,000 by Western Australian owner Peter Caporn.

“Peter bought Pinzu off us a few years ago and paid a fair bit of money for him, $330,000, and after the horse had an early issue he was told he wouldn’t race again,” Chittick said.

Pinzu went on to win nine races, with the son of Pins’ career highlight a victory in the Listed Carbine Club of Western Australia S.

Caporn subsequently offered Celevacci through the Western Breeders Alliance’s draft at the Magic Millions Gold Coast Yearling Sale where he was knocked down to Durrant for AU$50,000.