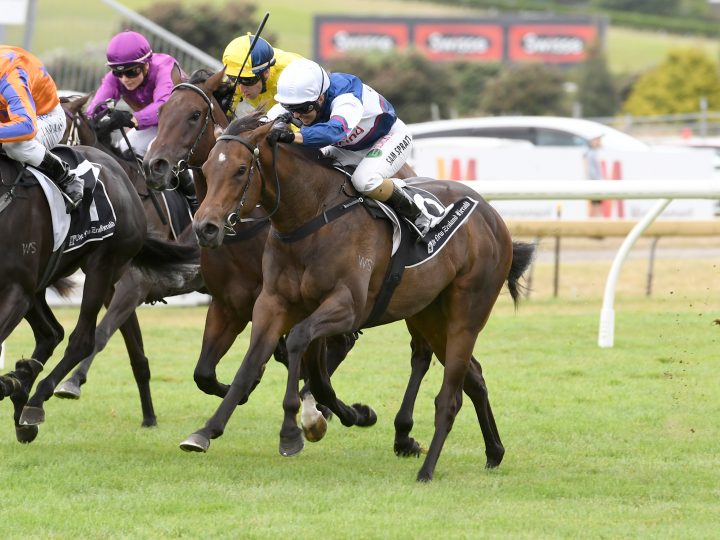 The sound of champagne corks popping at Waikato Stud aren’t uncommon and we had further cause for lively celebrations this afternoon.
Home-bred Hashalo turned her fortunes around when triumphant in the Gr.1 gavelhouse.com New Zealand 1000 Guineas (1600m) to give Savabeel a memorable double following his son Embellish’s win in the Gr.1 Al Basti Equiworld New Zealand 2000 Guineas (1600m).
And 20 minutes later, another graduate of our nursery struck when Ocean Emperor triumphed in the Gr.2 Gartshore Tauranga Stakes (1600m).
“Winning these Group Ones and drinking all this champagne is going to turn me into an alcoholic!” Waikato Stud principal Mark Chittick said. “It’s just fantastic and then Ocean Emperor wins the Group Two, I can’t believe it.”
Hasahalo is a daughter of the Encosta de Lago mare Halloween, who was a cheap May Sale purchase at Karaka at the insistence of Group One-winning Australian trainer John O’Shea.
“We bought her for $6,000, at John’s insistence, and she had a foot like a cow to be honest,” Chittick said.
Hasahalo was subsequently bred by WS along with John and his wife Isabel and sold at Karaka last year for $110,000 to Albert Bosma’s Go Racing NZ syndication company.
“She was a nice, athletic type of filly and it’s a great result for Albert and the team,” Chittick said.
“We’ve had a wonderful association for a long time and it’s great to see them get this success.”
Ocean Emperor is a son of Zabeel and the Pins mare Tootsie, who won seven races including the Gr.3 Mannerism Stakes (1400m).
“Gary Hennessy has done an unbelievable job with this horse,” Chittick said. “He’s been so patient and he’s always rated him so highly.
“Good on him, off the back of Ocean Park they bought this horse for $450,000 from us. They deserve it, he’s won a really nice race and it’s still early days, the horse hasn’t had much racing.”