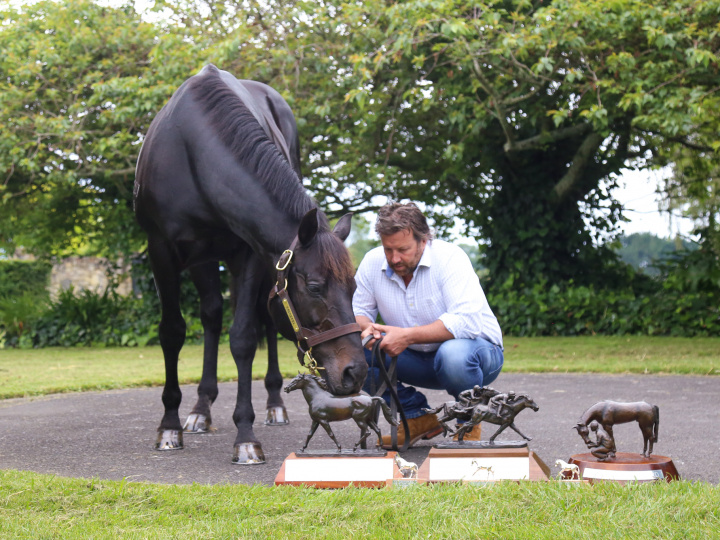 Following a stellar season from horses carrying the iconic WS brand, Waikato Stud has been announced as the Sir Patrick and Justine Lady Hogan Breeder of the Year for the 2020-21 season.

It is the eighth time the Chittick family operation has received this prestigious award and they are once again amazed and humbled by the honour.

“Obviously we are very proud to get the award again and we are honoured and very pleased,” Waikato Stud proprietor Mark Chittick said.

“To get four Group One winners in a season was amazing and to think our progeny have also been crowned the New Zealand Horse of the Year and the Champion Three-Year-old,” Chittick continued, referring to the recent announcement of New Zealand Thoroughbred Horse of The Year Awards, where Probabeel (Savabeel[AUS] – Far Fetched) was crowned the SENZ Horse of The Year and Champion Sprinter Miler and Aegon (Sacred Falls – Toss Up) the Champion Three-Year-Old.

“The number of stakes winners across all the stallions and from different broodmares is also very satisfying,” Chittick said.

“When this operation is your whole life and you get results like that it does tell you that the mix must be working. It is one operation, whether the horses are bred by G.J Chittick Investments or Waikato Stud and partners, they may be different names but it’s all one operation.

Probabeel provided Waikato Stud with their first Group One winner of the 2020-21 season when she won the prestigious Gr.1 Epsom Handicap (1600m). She also claimed the Gr.1 Futurity Stakes (1400m) as well as two Group Three events in the Geoffrey Bellmaine Stakes (1200m) and the Bill Ritchie Stakes (1400m).

Waikato Stud were also represented by three class three-year-olds during the season. Aegon, the son of their ill-fated home bred stallion Sacred Falls, was victorious in the blue riband Gr.1 New Zealand 2000 Guineas (1600m) in November after claiming the Gr.2 Hawkes Bay Guineas (1400m) on the way.

Later in the season he impressed winning the L(R) Karaka Million 3YO Classic (1500m) narrowly from Amarelinha, before heading across the Tasman to claim the Gr.2 Hobartville Stakes (1400m).

Amarelinha came into her own in the Autumn and wasn’t to be denied her Group One victory taking out the Gr.1 New Zealand Oaks (2400m) becoming Savabeel’s 22nd Group One winner. A week later in Mo’unga became his 23rd when he won the Gr.1 Rosehill Guineas (2000m).

In addition to the farm’s racing success, Savabeel made a clean sweep of the stallion premiership awards taking out the Dewar Award (combined Australia and New Zealand earnings), the Grosvenor Award (New Zealand earnings) and the Centaine Award (worldwide earnings).

It is the fifth time in the past six years that Savabeel has won the Dewar Award, reclaiming the title after his barn mate Ocean Park took the honours for the 2019-20 season.

“Last season was an incredible season for Savabeel, he had colts and fillies, two and three-year-olds and five, six and seven-year-olds winning stakes races,” Chittick said.

“I know we didn’t breed him but to have a horse like The Chosen One (Savabeel [AUS] – The Glitzy One [AUS]), who is typical of the calibre of older horses he can leave, it was great to see him crowned the Champion Stayer earlier this week.

“I mean you start to tally up Savabeel’s stakes winners and he is the third highest stakes winning producing stallion in the country and he has every chance of increasing on that. If he could sit between his grandfather Sir Tristram and his father Zabeel that would epitomise what a wonderful sire he is.

“He may be a 20-year-old but he is behaving like a 10-year-old and now he is obviously unfolding as a successful broodmare sire. Savatoxl winning the Gr.1 Goodwood (1200m) provided him his first Group One winner as a broodmare sire, a capacity in which he is represented by 13 stakes winners already.

“He has sons at stud who are attracting attention and there are some colts currently racing that have a huge chance of making it at stud as well. We are just so proud of him.” -Michelle Saba, NZTBA