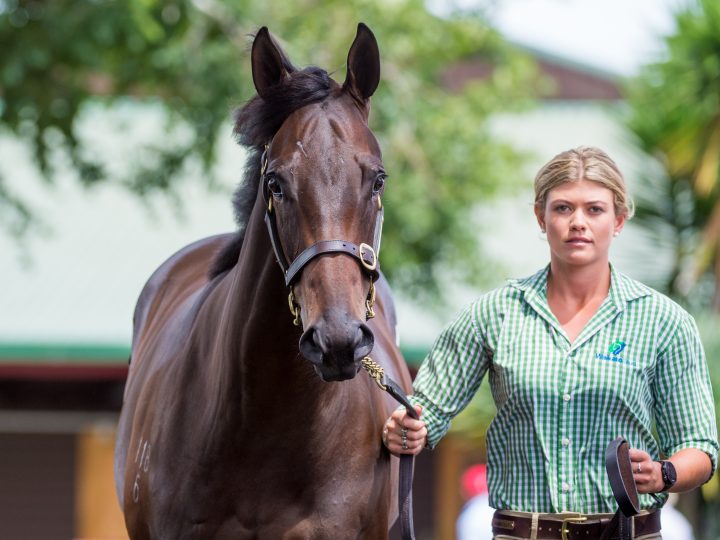 “We’ve had a great sale and there’s a massive amount of work gone into it, a great team effort from the staff and I knew we had a really nice draft,” stud principal Mark Chittick said.

“Our sires with runners couldn’t have done any better in the lead-up and Sacred Falls is doing a fantastic job.

“The chat before the sale on them was enormous, we didn’t have to do any talking – it was all coming from the buyers.”

Champion sire Savabeel was a dominant force throughout the sale and he provided Waikato Stud with their highest price yearling to go through the Karaka ring when his daughter out of Posy was knocked down to Cambridge horseman Dean Hawthorne for $875,000.

“We were very fortunate as a vendor to have two or three people determined to get her,” Chittick said. “I’ve only ever experienced that twice in my life.

The Savabeel filly’s mother Posy is a sister to the farm’s former top race mare Daffodil, winner at Group One level of the Australian Oaks, New Zealand 1000 Guineas and the Windsor Park Plate.

Today’s business was again about the demand for Savabeel’s yearlings with the list headed by a filly (Lot 595) out of Sitting Pretty, who was purchased by Yulong Investments for $625,000 after a spirited bidding duel.

The dam is an unraced O’Reilly mare who is a half-sister to the Waikato-bred Metal Bender, a four-time Group One winner of the George Ryder Stakes, Doomben Cup, Randwick Guineas and the Rosehill Guineas.

The desire to secure the progeny of Waikato Stud sire, Savabeel, continued unabated as Lot 595, a filly out of O’Reilly mare Sitting Pretty from the stud’s powerful draft was knocked down to the bid of Victorian based group Yulong Investments for $625,000.

“Mr Zhang wanted to buy a Savabeel filly and that was his number one pick,” he said. “We’re pleased to be able to secure her.

“I knew we would be getting up to that level or thereabouts, but Mr Zhang really liked her. Quality is hard to get so you have to pay money like that.”

Fairgray indicated that Yulong hadn’t finished in their pursuit of quality bloodstock.

“It’s great we have been able to secure a lovely filly from one of the best nurseries in New Zealand.”

Fairgray confirmed the filly would be heading to Australia and possibly to Victorian trainer Ciaron Maher.

John Foote Bloodstock and trainer Darren Weir went to $320,000 for Lot 564, a colt out of the Pins mare Sequin, a six-time winner, and her dam Glitzy won nine including the Listed Rotorua Stakes.

The Savabeel colt (Lot 657) out of Tiffany Yellow was also popular and eventually knocked down to Peter So, of Hong Kong, for $280,000. She is from the family of the Group One-winning sprinter Terravista and the exciting unbeaten Australian juvenile Long Leaf.

Sydney trainer Bjorn Baker was also in the market for a Savabeel and he signed for Lot 581 at $215,000. The filly is out of the Galileo mare Showileo and the family of the Gr.2 Avondale Cup and Gr.2 City of Auckland Cup winner Showcause.

The colt is the first foal of the Zabeel mare Sheezababe, runner-up in the Listed New Zealand St Leger, and a daughter of the Gr.1 Sydney Cup winner Honor Babe The multiple Group winner Kiwi Golfer is another well-performed member of the family.