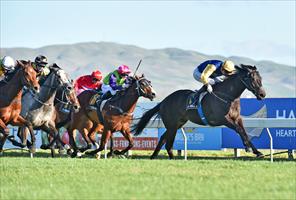 Former champion New Zealand jockey Michael Walker will ride Kawi in Australia. Taranaki trainer Allan Sharrock confirmed the engagement as he puts the finishing touches on the star son of Savabeel ahead of a three-start campaign in Perth.
“Michael’s going to be riding him and the horse looks magnificent,” he said. “He won a jump-out the other day and his last public appearance will be at the Waverley trials on Thursday. He flies to Melbourne on October 29 and he’ll be there for a day and a half before he carries on to Perth. There’s a risk involved every time you travel a horse, but Kawi is a good traveller so I can’t see any problems.”
The multiple Group One winner will make his debut at Ascot on November 5 in the Gr.2 Lee Steere Stakes, a race won last year by Saturday’s Gr.1 Cox Plate contender Black Heart Bart. “That’s over 1400 metres at weight-for-age so it’s an ideal race,” Sharrock said. Kawi will then target Ascot’s two major prizes, the $A1 million Gr.1 Railway Stakes on November 19 and the $A1 million Gr.1 Kingston Town Classic on December 3.
Walker served his apprenticeship with Sharrock and he made a remarkable start by winning both the apprentices’ title and the senior jockeys’ premiership with 131 winners in his first full season in the 1999-2000 term. Walker is now based in Victoria where in recent seasons he has forged a successful association with the Hayes and Dabernig training combination.