Wallace on hand for Stakes triumph 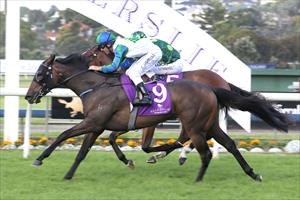 Gary Wallace missed one of his most memorable racing achievements last season and he wasn’t about to make the same mistake on Saturday.
Wallace, a leading real estate agent with Bayleys in Auckland, blocked out some time to ensure he was at Ellerslie to see Coldplay take out the Gr.3 Eagle Technology Stakes (1600m).
“When she won the Eulogy I wasn’t even there, which was a bit embarrassing,” he recalled.
“I watched it at home. When you have a busy life and work seven days it is hard to get away.”
The daughter of Savabeel and the O’Reilly mare Forty Two Below was bred by Wallace and, recognising a friendship spanning in excess of three decades, carries the Waikato Stud colours with principal Garry Chittick sharing in the ownership.
“I first met Garry when I was in business in Palmerston North with three hours to fill before catching a flight,” Wallace explained. “A friend of mine said they were going out to see Garry as he’d bought a new horse. I left with two shares in Centaine!”
With shares in a stallion the next step was to find a mare so Chittick purchased the Mussorgsky mare Mussella for Wallace. “She was in work with Margaret Bull, we raced her for 12 months and then bred from her,” he said.
Wallace had his eye on Coldplay’s grand-dam long before she found her way through the sale ring as a broodmare prospect. Icy Calm had racked up an impressive race record as the stakes winner of five races, with eight placings, including one at Group Two level. She also appealed as a daughter of Western Symphony from the Sharp Edge mare Snow Leopard, an unraced half-sister to Rancho Ruler.
“I actually tried to buy her earlier but the offer was turned down, I didn’t go to the sale but Garry bought her, and for less than I originally offered,” he recalled.
Wallace repaid Chittick by then providing him with the first stakes winner for the Waikato Stud stallion O’Reilly, when Icy Calm produced The Big Chill. “I keep reminding him of that too,” Wallace joked. “I retained The Big Chill’s full-sister who was Forty Two Below.”
Despite showing early promise from Danny O’Brien’s stable an injury meant the filly returned to New Zealand. From a brief four start career where she was prepared by Russell Cameron, Forty Two Below recorded one win and three second placings before retiring to stud.
“I have bred some average horses, I mainly breed to sell but it is interesting that when I bred this filly [Coldplay] Garry said she was the best type I had bred and, if I was serious about keeping a filly to race and breed from, then this was the filly to consider,” Wallace said. “I said that I’d do that if she could race in the Waikato Stud colours and he leased a half share in her.”
Wallace said the first indication that Coldplay might be above average came via a phone conversation with Mark Chittick during the yearling sales where he said trainer Murray Baker was singing her praises. “He said Murray had been telling them about his next really good horse, I said, ‘that’s great, what is it’ and he said, ‘it’s yours’.”
Coldplay’s first few trials had Wallace convinced that his trainer might be slightly delusional. “She did nothing and I thought Murray didn’t know what he was on about,” he said.
Come race day though and things were different, Coldplay followed a first up third with a win and two starts later took the Gr.3 Eulogy Stakes. For the remainder of the season she filled a frustrating run of fourth and fifth placings in Group company before her final run of the season in the New Zealand Oaks.
“We gave her a good break after the Oaks and Murray kept saying, ‘these Savabeels get better and better’,” Wallace said. “Even though we were in Town Hall company on Saturday I was confident she would perform well, she looked magnificent. I take my hat off to those guys [Baker and co-trainer Andrew Forsman] they know their business!”
“I’ve been in it a long time and I love it, it’s a journey and it is lovely to have a win like that,” Wallace said.
Wallace will sell a full-sister to Coldplay through Waikato Stud’s draft at the 2017 Premier sale. Last year a full-brother was knocked down for $475,000 to the Hong Kong Jockey Club. A three-year-old full brother, Positive Carry was a winner in September from Trent Busuttin and Natalie Young’s Cranbourne stables. He has subsequently been gelded and returns to the stable on Monday. – NZ Racing Desk

West Wind continued on her winning way at Cranbourne last night with another dominant performance. The Waikato Stud-bred and raced daughter of Pins went back-to-back with success over 2025 metres in the Pinker Pinker Plate. …