War Affair back in business 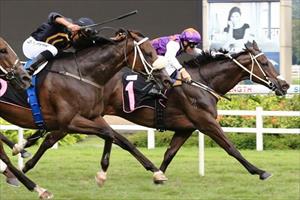 O’Reilly’s outstanding son War Affair has overcome adversity for a return to winning form. The six-year-old bounced back from a series of injuries to triumph over 1400 metres at Kranji yesterday.
The former Singapore Horse of the Year was given an economical run by Danny Beasley Horse of the Year before angling off the rails mid-race when the pace slowed. He strode to the front in the straight and held a strong gallop to post his first victory since he claimed the Gr 1 Patron’s Bowl in June, 2015.
“He was in the box-seat and just needed to quicken when Danny asked him to go,” trainer Bruce Marsh said. “From that draw (2), as there were a lot of stayers in the race, we had to be quite handy without putting too much pressure on him. He showed his class to come back from a long break and to win second-up – what a fantastic performance.”
Beasley said Sunday’s race was a step toward the Gr 1 Kranji Mile and the win was a welcome bonus. “The plan was to give him a good race, not a hard race, win or lose, and it’s worked out perfectly,” he said. “We all know War Affair is a horse who can either sit on the pace or come from off it, but we just went with his normal pattern, just to give him the easiest run possible so he can have every chance at his next race. He was probably 85 per cent today, but he will definitely be 100 per cent in two weeks’ time.”
Back to all news
SHARE
Recent News