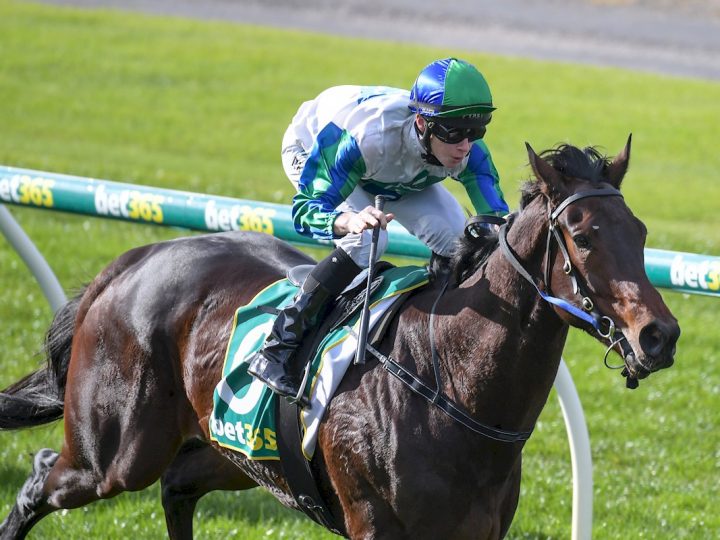 Tahi (NZ) ridden by Patrick Moloney wins the Apollo Bay Community Bank Maiden Plate at Geelong Racecourse on June 23, 2017 in Geelong, Australia. (Reg Ryan/Racing Photos)
A son of two late WS superstars O’Reilly and Glamour Puss made an immediate impression in his racetrack debut last week. Carrying the colours the Matamata farm, the Danny O’Brien-trained three-year-old Tahi stepped out for his debut in a 1240-metre maiden at Geelong.
He bounced to the front under Patrick Moloney before putting his rivals away in the straight to score by three and a quarter lengths. O’Brien trained the sprinting mare Glamour Puss to Group One wins in the 2005 Goodwood in Adelaide and Salinger Stakes in Melbourne.
Glamour Puss also graced the Royal Ascot stage 11 years ago when seventh in the King’s Stand Stakes won by Takeover Target, and 10th in the Golden Jubilee Stakes before being retired to the breeding barn. She sadly died last year and is buried at WS alongside the stud’s champion sire O’Reilly, who died in 2014 at the age of 21. The mare produced nine foals, four by O’Reilly.
Tahi became the seventh horse out of Glamour Puss to race and win, and Moloney was taken by the gelding’s performance. “I think Danny O’Brien and the connections are going to have a lot of fun with him,” Moloney said.
Back to all news
SHARE
Recent News