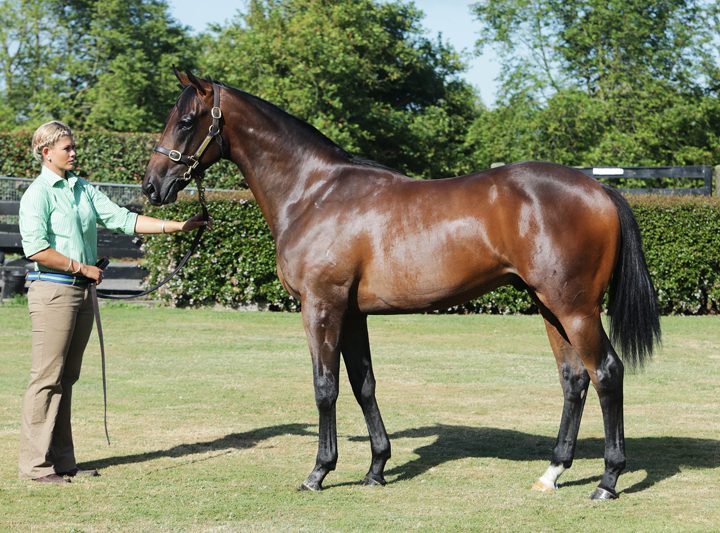 Fastnet Rock - Dance on By Colt
Waikato Stud hit the jackpot at Karaka when the colt with the rock star pedigree was sold for $600,000 to one of racing’s stars.
The son of Fastnet Rock is from a full-sister to international sire sensation High Chaparral and he had an army of admirers.
The colt drew an opening bid of $200,000 and thereafter Te Akau principal David Ellis locked into a battle with the internationals.
When the action was finally concluded it was legendary Australian trainer Bart Cummings, through his grandson James and Sydney agent Duncan Ramage, who made the winning bid.
“He is a beautiful colt from a family that has produced 27 percent stakes winners to runners and with his outstanding extended pedigree he is an exciting stallion proposition if he can be successful on the track,” the younger Cummings.
“We’ve trained a Gr. 1 Australian Guineas winner in Rock Classic from the sire and if this colt could win a race like that then the sky’s the limit for his future.
“He looks the complete package as he’s very athletic with a lovely walk and a great nature on what we have seen to date.”
Cummings was coy on the potential owner of the colt but did admit it was likely to be several long-term supporters of the stable.
”We’ve bought him for a group who have been with us for a number of years and enjoyed plenty of success,” he said.
“At this stage, I think they will probably take the entire ownership although there may be a small share left for an extra partner.”
Back to all news
SHARE
Recent News