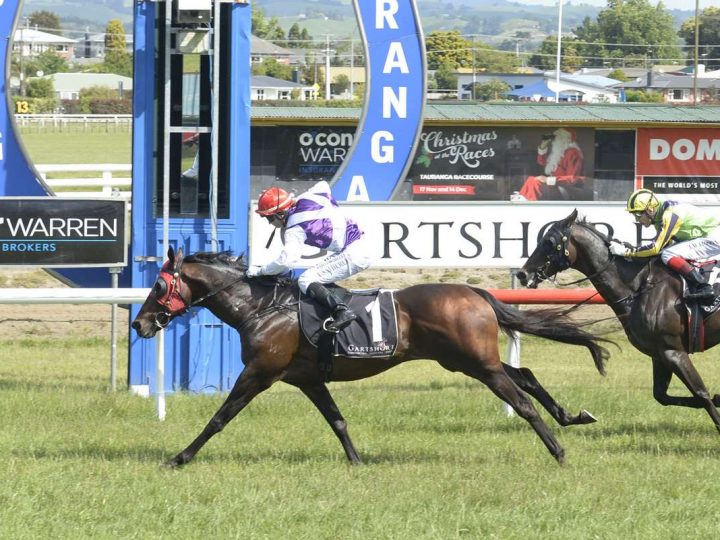 To quote famous baseballer Yogi Berra, it was “déjà vu’ all over again” at Tauranga on Saturday when classy customer Ocean Emperor defended his Gr.2 Gartshore Tauranga Stakes (1600m) crown in fine style.

The seven-year-old Zabeel entire had sprung a minor upset in the 2017 edition of the contest when downing Miss Wilson and multiple Group One winner Kawi, as a rating 82 assessed runner.

Twelve months on and with a second Group Two title under his belt, the Gary Hennessy-trained galloper showed just why he is now considered one of the top milers in the country as he produced a determined finishing burst to register his ninth career victory.

Handled superbly by stand-in rider Lynsey Satherley, who was substituting for an ill Dylan Turner, Ocean Emperor sat patiently in the trail throughout behind pacemaker Nicoletta. Satherley produced her charge at the top of the straight and after battling hard with the pacemaker, he mastered her close to the line to take the victory.

“He looks amazing and is doing things right,” Hennessy said.

“The horse has a huge turn of foot so we don’t want him leading. You can see when he does get in the trail, he has something to offer and he explodes in to it and doesn’t give in.

“He has a ton of guts and is just a lovely horse to deal with.”

Hennessy, who has shown he isn’t afraid to travel his charge after taking him to the rich Kranji Mile in Singapore last May, has a Group One prize in mind as his next assignment.

“We set a plan in the spring and unfortunately we had a hiccup as we had planned to have him in Melbourne,” he said.