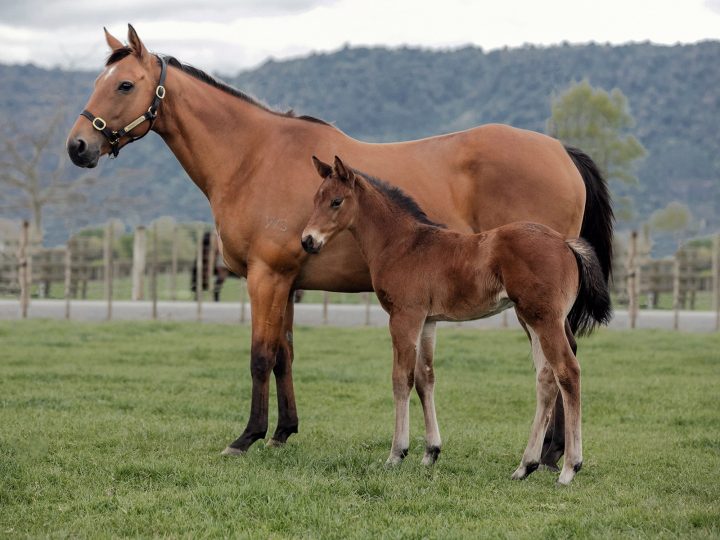 Eudora with Savvy Boy as a foal

In the famous foals segment, we will meet foals from some of Australasia’s toughest race mares as well as siblings of elite racehorses. This week we meet a half-brother to dual Group One winner Savvy Coup.

Savvy Coup’s dam Eudora (by Pins) hails from one of Waikato Stud’s iconic families and after sustaining an injury to her eye as a yearling, was never able to race. Being a sister to Group winning Pins mare Tootsie (also the dam of multiple Group winner Ocean Emperor) and then later, Legless Veuve, she was happily retained by Waikato Stud to breed from.

Eudora who has just turned nine has produced five foals. Her first foal, a filly called Save The Stars (by Savabeel) was a winner over 1200m and was retained and raced by Waikato Stud. She recently produced her first foal, a stunning filly by Tivaci and has been covered by the Gr.1 All Aged Stakes winner again this season.
Dual Group One winner Savvy Coup (by Savabeel) was Eudora’s second foal and since her first foal had already been retained to race/breed, she was sent to the yearling sales.

To date, Savvy Coup has won six starts including two Group One’s (Gr.1 NZ Oaks, Gr.1 Livamol Classic), and two Group Three races (Gr.3 Eulogy Stakes, Gr.3 Lowland Stakes). Within the space of just one racing season, she has won nearly $700,000 in prizemoney and is off to Australia to take on Winx in the $5 million Cox Plate on October 27.