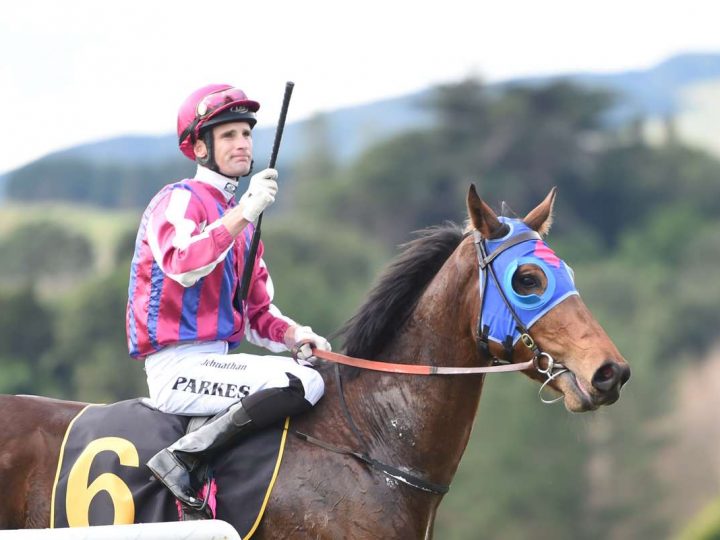 Veuve Clicquot
WS resident Rock ‘N’ Pop is on the board after his talented daughter Veuve Clicquot was successful at Otaki this afternoon. The filly has been one of only a handful of first crop representatives this season for the Group One-winning son of Fastnet Rock.
Veuve Clicquot improved on her debut run to open her account in the New Zealand Bloodstock Pearl Insurance Series Race. She had been very green when beaten into third at Trentham earlier this month, but the addition of blinkers saw her safely home for the thick end of the stake.
“She’s got a wonderful physique, a big strong filly with a lot of natural muscle on her,” said part-owner and trainer Tony Bambry, who believes she could potentially be a classic contender next season. “We’ll look at heading toward Christchurch in November. She’s that sort of filly, she’s going to get over ground.”
Veuve Clicquot jumped well to sit outside the leader and she proved too strong in the run home under rider Jonathan Parkes. She is a daughter of the stakes winner Megan’s Tough Love and the family of the European Group One winners Ajdal and Formidable.
Rock ‘N’ Pop was lightly-raced and won three races, including the Gr.1 New Zealand 2000 Guineas and was runner-up in the Gr.1 NZ Derby and third in the Gr.1 Waikato International Stakes. He is a regally-bred son of the dual Group One New Zealand Derby and Championship Stakes winner Popsy.