Shillelagh steps up at Wanganui

More Success For Prolific WS Family One of Waikato’s most prolific families provided a timely reminder of its potency on Friday, when the veteran performer Zinly (NZ) (Danasinga) was successful at Kranji. The eight-year-old gave …

Shantaine In A Class Of Her Own Versatile mare Shantaine added further performance to her illustrious pedigree with a sterling performance to win the closing event at Ellerslie today. The WS-bred and sold four-year-old mastered …

Waikato is hoping lightning can strike twice in the Gr 1 AJC Oaks at Randwick on Saturday. The O’Reilly filly Dating will be out to emulate the Chittick family’s high-class performer Daffodil, who won the …

Almodovar may have a long way to go to match the deeds of the outstanding stayer Galilee but the progressive son of WS’s Pins has made an encouraging start. The three-year-old completed a hat-trick of …

Dennis Ryan, NZTM Release If Victorian trainer Danny O’Brien needed a reminder that a good New Zealand-bred horse can be sourced from anywhere, he’s got it in spades with his history-making filly Shamrocker (NZ) (O’Reilly). … 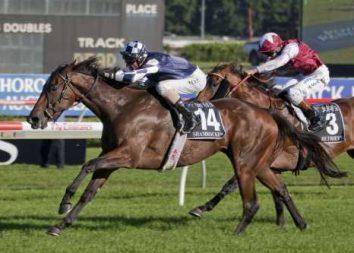 O’Reilly’s outstanding daughter Shamrocker earned herself a piece of Australasian racing history at Royal Randwick on Saturday. She completed a unique double when she once again proved superior to her male counterparts with a stunning …

Exciting three-year-old talent Scarlett Lady earned herself black type honours when she led home a WS quinella in the Listed Manawatu Breeders’ Stakes at Awapuni today. The daughter of Savabeel completed an impressive hat-trick of …

Mark Chittick was right on the money when he tipped their chestnut colt by Pins to be WS’s star lot at the Sydney Easter Yearling Sale. His expectations were met with the youngster topping the …

Promising three-year-old Builder O’Reilly set up a winning double for WS stallions in Melbourne at the weekend. The son of champion sire O’Reilly posted a runaway success at the Ballarat meeting and his performance was …

WS gained a good measure of compensation in defeat after their colours were lowered by Undisclosed in the Hong Kong Jockey Club Trophy at Awapuni. The farm’s hopes were mainly pinned on the talented No …

Gr 1 winning jockey Jonathan Riddell celebrated further success at Awapuni on Saturday but in a different role. Jimmy Choux’s regular rider played a pivotal part in the success of the promising WS-bred and sold …

WS played a major hand in the finish of Saturday’s Gr 1 Rosehill Guineas when crack colt Jimmy Choux provided their former champion stallion and leading broodmare sire Centaine with yet another top-flight success. For …