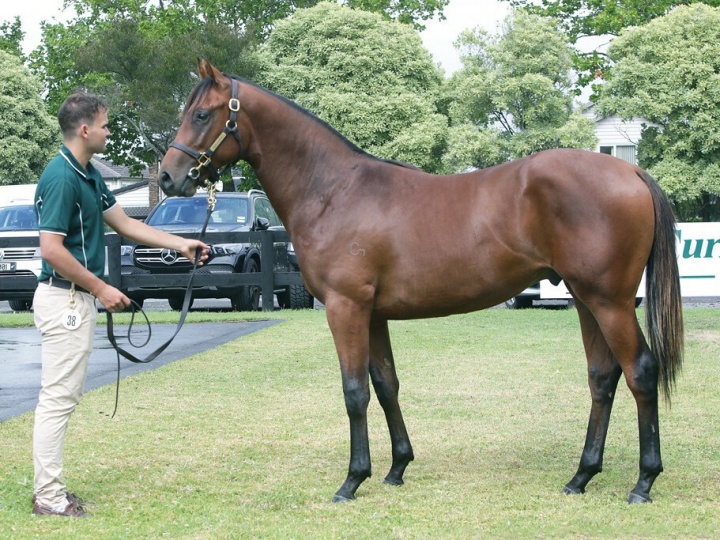 Dimaggio as a yearling

Waikato Stud celebrated two-year-old success on Saturday afternoon at Hastings where Dimaggio triumphed at the first time of asking.

The Matamata farm is involved in the ownership of the Tony Pike-trained youngster and also in his stablemate Rudyard, who came from last on the turn to finish runner-up in the 1100 metre juvenile event at Te Rapa.

Dimaggio was only opposed by two rivals over 1300 metres and he sat in the second spot to the turn before wearing down the leader close to home under the urgings of apprentice Wiremu Pinn.

“It was always going to be a funnily run race with only three runners. I thought Wiremu was a bit cocky to be honest and sat a bit pretty for a while, but he got the job done,” Pike said.

The powerfully built Dimaggio had been a trial winner at Ruakaka last month and is considered an exciting prospect for next season.

“He’s a beautiful horse and has always showed plenty of ability. He will be a lovely three-year-old over a bit more ground so we’re looking forward to that,” Pike said.

Dimaggio was offered by Curraghmore at New Zealand Bloodstock’s National Yearling Sale at Karaka where Pike signed the ticket at $95,000.

He is the first winner for the Pins mare Pinstripe and she was successful twice and is a half-sister to the G2 Shannon Stakes and G3 Lord Mayor’s Cup winner Firebolt.

They are from the Woodman mare Woodsong, who is out of the G1 Railway Handicap winner Kailey.