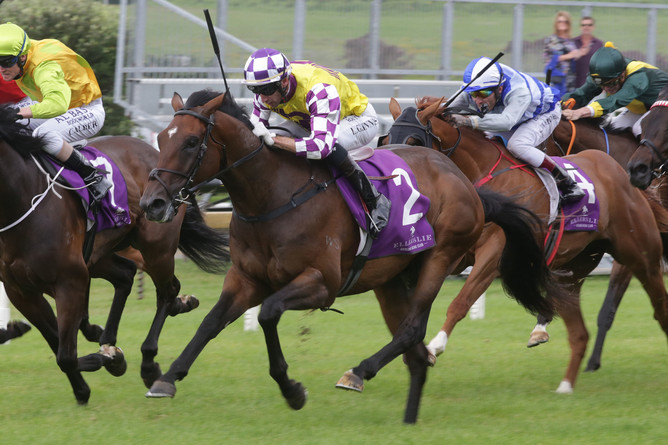 Tony Pike looks to have unearthed another rising star in the form of the Waikato Stud-bred and sold Surely Sacred.

The Cambridge trainer produced the three-year-old son of Rock ‘n’ Pop to come from last with a barnstorming finish to win the Gr.2 Auckland Guineas.

“With the outside gate we were always going back,” Pike said. “The favourite (More Wonder) had a tough trip and he tried to follow that and he wasn’t taking him anywhere.

“Once he got into the clear, he has got a great turn of foot. He is still learning as well, this is only his third start, so he is an exciting horse going forward.”

It was a monumental result for Waikato Stud stallion Rock ‘n’ Pop, with Surely Sacred recording his first stakes win for his sire.

Purchased out of Waikato Stud’s 2017 New Zealand Bloodstock Premier Yearling Sale draft by Raffles Racing for $160,000, Surely Sacred will now likely head toward the Listed Karaka Million 3YO Classic at the end of the month before a possible tilt at the Gr.1 New Zealand Derby (2400m).

“We’ll obviously discuss that with the owners, but obviously the Karaka Million is a big stake and a great night,” Pike said.

“They will all be over here so I’d say they will be leaning towards that. We’ll just get him home and see how he pulls up.

“He is out of Provocative’s (Gr.1 Queensland Oaks winner) family, so there is a little bit of staying blood in there. It will be nice to think he can get a Derby trip, but he’ll tell us that on the way through.”