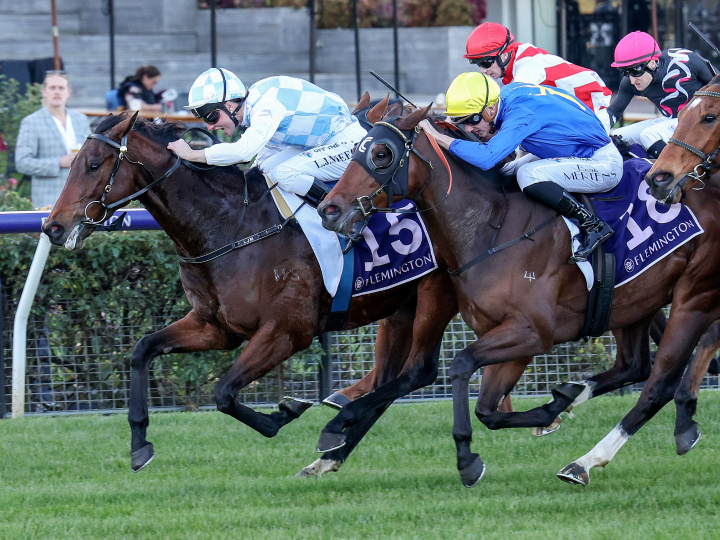 Progressive short course performer Ocean Beyond produced a superb performance on Saturday afternoon to down a competitive line-up in the Listed Straight Six over 1200 metres at Flemington.

The Waikato Stud-bred and sold son of resident sire Ocean Park also ensured he will forever be a special horse for conditioner Andrew Bobbin, who provided him with his first black-type success.

“He’s a young trainer on the way up and I’m so pleased to ride this horse for him,” successful jockey Linda Meech said.

Ocean Beyond was away well to settle in behind the leading division and, once he found clear air, the 4-year-old accelerated quickly to forge clear.

“This horse is flying and I was looking for a way to get out without causing any interference,” Meech said.

“I had a lap full of horse and was travelling better than any of them 200 metres out.”

Ocean Beyond wasn’t offered by Waikato Stud as a yearling and was subsequently passed in when offered through Ohukia Lodge’s Ready to Run Sale draft before Warrnambool trainer Daniel Bowman purchased him privately.

He won three times for Bowman, including the Listed McKenzie S., and subsequently transferred to Bobbin’s Stawell stable. He finished runner-up at Caulfield in his first appearance before going one better at Flemington.

Ocean Beyond is a son of the Pins mare Frankly, who is a sister to the Listed Lightning H. winner and sire Keano. Their dam O’Really is a half-sister to the champion sire O’Reilly.

Frankly has subsequently produced a colt by Savabeel, who was sold at Karaka to champion trainer Chris Waller and agent Guy Mulcaster for $310,000 and she has since had fillies by Savabeel and Ocean Park and is back in foal to Savabeel.